Due entirely to an error in my initial planning, today was not quite as I had envisaged. Somehow, when I drafted my schedule, I had assumed that I could walk from Prestwick to Dunoon in one day. When I actually plotted it on my Viewranger app a couple of weeks ago I thought that 50 miles in one hit might be pushing it a little and that maybe I needed to compensate somewhere else to get back on to schedule. The logistics of this trip would no doubt complicate any alteration – but needs must.

With another warm day ahead I was a little relieved to see some early cloud cover to help give my silky soft and fair complexion a bit of a break. I headed straight down onto the beach skirting yet another championship golf course south of Troon. As the beach closed in on Troon itself I discovered a very two-faced town. To the south of the headland the golf course and housing displayed a gentile wealth. On hopping over the headland, the picture was entirely different. The port was scruffy, the housing poorer and even the beach was less attractive to both look at and walk on, with flooded channels and muddy water filled ripple marks filling my now completely porous boots.

At least it was a beach and as I followed it north towards Irvine it gradually re-established itself as a firm sandy trail and as I turned inland towards the town centre three swans decided to do a fly past at head level. I snatched the camera out of my waist belt and managed just one quick shot before ducking to feel the wind of their wing beat as they slowly gained height on their southbound flight path. 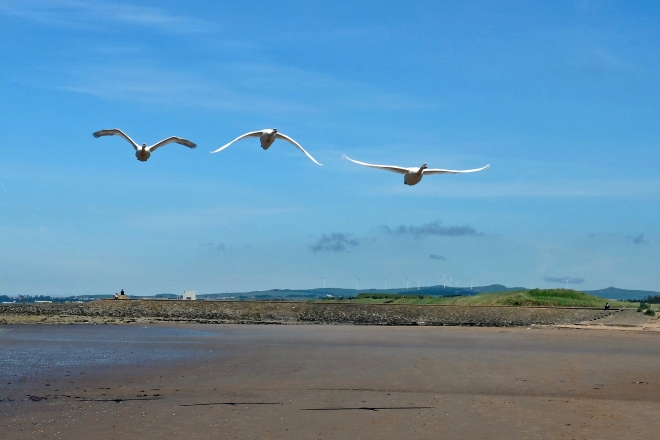 Irvine had a huge out-of-town shopping centre with the usual mix of conglomerates and the now typically decimated high street to boot. After this reminder of normality in its ugliest form taking to the cycleway through heath and scrub to Stevenston and Saltcoats was a pleasure, even if I did pass the rough caravan park at Saltcoats which had apparently hosted a murder in the last month or so. I was hoping Reesy hadn’t booked us in for the night.

Seamlessy I seemed to arrive in Ardrossan where I dropped onto an increasingly silty beach to skirt a distantly attractive West Kilbride. The little strip of sand and shingle continued all the way to the headland at Portencross with little pockets of pink zebra people on show, some of whom were showing far more than I would have preferred. Sometimes I think that some bits are just better covered up.

Weather logic seems to have gone. It just gets warmer and warmer with every step north. I suppose a mediterranean climate in Scotland will be the norm now that we have burnt all those evil fossil fuels. Whether global warming is fact or fiction, the warm welcome I got from staff as I paced past Hunstanton Nuclear Power Station was genuine. This was in stark contrast to the stern unsociable armed police I came across at Sellafield a few weeks ago.  Nonetheless as a ‘licensed nuclear site’ I did wonder what an unlicenced one would look like and whether there are any hidden away in a deep dark corner somewhere.

Following the Ayrshire Coast Path was now a bit of a bitumen trail, but at least it did try to avoid the main road by virtue of a path / cycleway to the walled seafront at Fairlie and on to Largs, a town with barely a tatty house in sight. Largs is very middle class and clearly full of wealth with a well and expensively populated marina.

Largs is also home to the temptation that is Nardini’s ice cream parlour. I entered only to be flooded with a plethora of colours and flavours. There was no way I would ever be able to decide so asked the girl serving as to her favourite. She filled my large cone with Stracciatella (vanilla and dark chocolate). I was hoping for something a little more exotic, but she was right and it was, by far and away, my best ice cream to date.

From Largs it was up and inland a little to walk lanes parallel to the main road below. Eventually the lanes led me back down to the main road for Inverkip and roadside paths up to McInroy’s Point at Gourock to catch the ferry over to Dunoon. After nearly 26 miles of very hot tarmac I felt I deserved a break. A cool shower back at the camp site was just bliss.

Crossing over to Dunoon marks the start of wild Scotland to me. Or, as is my belief, “real” Scotland starts here. For today I gave myself a short 16 mile forest and road walk. Unfortunately today I also cut out two small peninsulas as compensation for my mileage planning error earlier. I could have taken the original planned route but it would have left me on a Friday night in a bothy miles from Snickers. A bothy or tent would have been fun in this weather, but with the logistics of support driver changeover day – it really wouldn’t have worked. Therefore, the route change was a necessity I’d rather not have made.

To brighten things at least my new route took me high into coniferous forest. Through the occasional clearings views back down into Dunoon and the Clyde were stunning. Even a road walk through Glen Lean didn’t disappoint and lunch at the head of Loch Striven presented a glorious blue / green vista with clouds befitting of the Teletubbies.

A short walk meant an early finish and I was done before 3 pm. For Reesy that was perfect as I was able to shuttle him back to Dunoon to catch an early ferry back to Gourock and the joys of a weekend wedding bash. He departed with a suspiciously un-Scottish tan and my thanks for another week of excellent support.

3 thoughts on “Crossing to the wild west”