I started out early despite the forecast of heavy rain for the entire day. I elected for head to toe waterproofs even though the discomfort of claggy legs debate had still not been settled. In this instance it was a wise choice as the track up Beinn Ghormaig was very boggy and barely a single step was a dry one.

In the driving rain I was equally driven to follow the track on my map up into the cloud and over 1,300ft. In doing so I was blind to the route I had plotted and when the track abruptly abandoned me in the middle of a moor it dawned on me that I had made an error and I either had to backtrack a mile and climb again or try to rediscover the path further ahead and somewhere down below. I voted for some proper map use and contoured round to find a burn to follow steeply down towards fog hazed landmarks. I was already angry at myself for making an error, so when I slipped on my backside and bent my second walking pole double, pulling my shoulder in the process, my anger was complete and the barrage of expletives which rumbled down the hillside were hopefully muffled by the thick cloud and persistent heavy drizzle now soaking its way into every nook and cranny.

Eventually I rediscovered my path, but not before falling twice more and to top it all I then tripped over a log hidden in the deep wet grass and fell forward with a juicy wet face plant. If anyone had been able to hear me, other than the red deer gazing at me disdainfully, I’m sure they would have concluded that I was suffering from Tourette’s. The deer turned, flashed their white rumps and bounded off into the forest with an almost mocking display of agility and aptitude. Altogether I had now doubled my tally of falling over on this walk and I had done it in twenty minutes.

My path became a track once more and I followed it East along the South shore of Loch Sunart through the dripping and sodden Sunart Oakwoods, remnants of the ancient temperate rainforest which used to cover so much of Britain. I was very tired by the time I rejoined the road and the last six miles into Strontian were the hardest I had experienced for some weeks. At least the rain had eased and I was able to remove my claggy overtrousers and, with a new pair of boots, I was pleasantly surprised that my feet were still relatively dry. I picked up a discarded newspaper from the roadside to catch up with the sport. I had not been able to listen to anything for a few days, as the radio signal had been non-existent, so I was a little annoyed to have missed yet at the same time cheered to read of Root and Anderson’s record last wicket stand at Lords. And to cheer me further the rain filled skies had at least filled the loch-side waterfalls turning them into raging torrents. 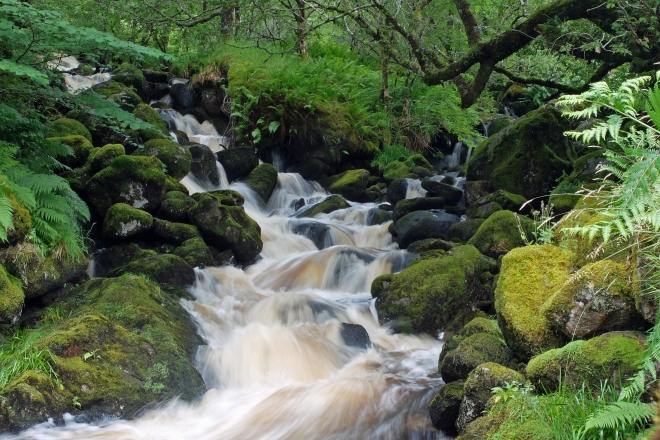 There were no map reading skills required today or waterproofs. Instead I had just a long warm and sunny road walk, now purposefully back West along the North shore of Loch Sunart, once again striking through the now drier Sunart Oakwoods. Occasionally the woods would clear as I rounded a small bay or inlet. Each time they did I was rewarded with a new peaceful view back across to Morvern and another mirror like pool to check for otter activity. Unfortunately I saw none. However, between Strontian and Salen I did come across a Pine Martin trotting along the road towards me. He was a new sighting for me and we both froze in unison. I reached for my camera but by the time I had raised it to my eye, he was already trotting away and into the bracken. In moments like these I wished to have carried my big SLR camera with its long telephoto lens, but the practicality of doing so just doesn’t work and my little compact camera has done me grand so far, so I musn’t complain.

Walking along the tiny winding and undulating B road towards the isolated communities of West Ardnamurchan, I couldn’t help but amaze myself at the buses, builders trucks, cement lorries and huge tippers using it. I sent Sue a sniggering and taunting text warning her of a huge tipper wagon heading her way as she would be driving up behind me to meet me at the rendezvous point. But then I remembered….it was my motorhome she was driving. 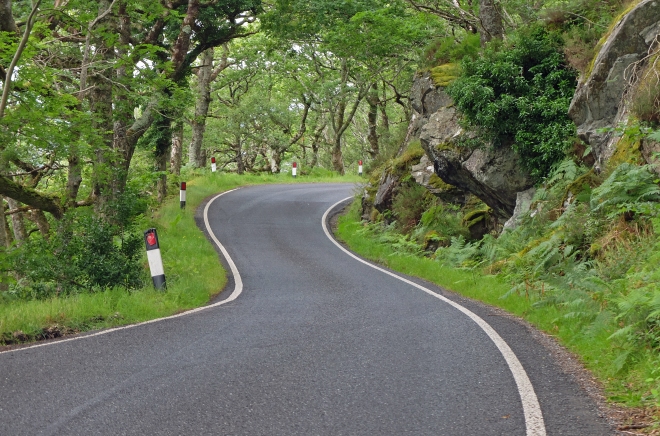 The day ended at ‘Nadurra’, the Ardnamurchan Natural History Centre at Glenmore. Snickers was in one piece, but I’m not so sure Sue was. Diesy was clearly stressed too, but I suspect Sue’s language in getting there may have upset him. We distressed with a pot of tea and a Mint Feast. I ate mine as if greeting an absent but very old friend and I drove back to the campsite in the process spotting a female Hen Harrier flying across our path.

It was an increasingly warm and muggy day as I continued along the same road West. It quickly broke out of the Sunart Oakwoods and began to climb up onto the very familiar volcanic landscape of West Ardnamurchan that I could almost call my second home. I had mapped a small part of it as a Geology student thirty years ago and had been back many times since with my family on holiday and as a solo training week, for this walk, only last November.

I could’ve taken the short route option into Kilchoan, cutting through the hills, but being a sentimental old fool I elected for the road route I always take and climbed up and inland around Ben Hiant and over to Loch Mudle. The view back down towards Kilmory, my mapping area, gave me my first sight of the North side of the peninsula and out beyond towards Eigg, Rum and in the far distance, hidden in haze, the Coullin Hills of Skye. I just had to stop for lunch and a rather poorly posed selfie.

It was then a three-mile drop down into Kilchoan, playing a wailing Chris Martin in my iPod as he sang “para…. para…. paradise” into my lug holes. I met up with Sue and Diesy on the Pier Road for a wander down to the seafront and across the foreshore to see a seal colony. I took a photo across to Mingary Castle, now shrouded in scaffolding as it undergoes a major and very expensive looking refurbishment. For the observant reader, I’m sure you can find the other photo of Mingary Castle I have used on this site.

The evening was spent talking nerdy geology stuff with Sue and chatting to locals and workmen from the castle in the Kilchoan Hotel where we enjoyed my first fish supper for what felt like years. It had been a long haul to get this far and I felt tired and a little flat at having achieved this particular target. It would have been lovely to share it properly with my family and to do so by phone just wouldn’t have been the same and possibly even insensitive, so I entered Kilchoan a little low-key.