Having saved my support crew skin by stepping in to cover three weeks in North Scotland, Mike headed off on his long journey home with my deepest thanks once again. Ahead of me lay a few days of rather complicated logistics. After sorting out my chores and catching up on admin, I decided that rather than worry the best thing I could do was go with the flow and let the support crew sort things out among themselves. It worked and over the next couple of days I managed a good catch up with the West coast support gang of Geoff, Lorna, Sue and Diesy as well as Sue’s daughters Steph and Abi. To complete the puzzle, Amy and Glyn were to join me the following day and then Bob was to take over driving duties for the rest of the week. It all rather hurt my brain but at least I was rewarded with a rare but welcome bath.

With the weather looking decidedly grey, both Peterhead and neighbouring Boddam were looking more than a little downbeat. The power station set them both off against each other nicely but also set me up for a lovely cliff top walk around the Bullers of Buchan rich with its dramatic arches and stacks. It was very much the end of the sea-bird season, so I saw little of the razorbills, guillemots, kittiwakes and even puffins that frequent the cliffs. Fulmars were still in residence, but I’m sure I would have been much happier visiting this part of the coast in May.

Amy and Glyn joined me just beyond Slains Castle and we shared twelve miles from the sand at Cruden Bay and across overgrown barely used misty coast path. Sadly the with the haar rolling in there wasn’t much to see but their company more than made up for it. Conversation was easy and time flew by as we took back to the lanes around Collieston towards Newburgh.

The evening was a grand one as I notched up my eighth borrowed bath of the trip so far with the added bonus of a spare bed and dinner at Sue’s place with Lorna, Geoff, Abi and Bob for company. It was all very civilised and warmly welcome even though I plainly admit that I have become more than a little attached to the comforts of Snickers over the last seven months. So much so, that I find breaking the routine to be mildly unsettling and a little confusing in terms of knowing exactly where I am and where things are. My long journey around a big island seems to have shrunk my world into a sharply focused bubble.

With Bob now at the reins we headed back to Newburgh and I ventured straight onto the beach to be rewarded with the sight of a huge seal colony whelping and barking on the opposite shore at Newburgh Bar. With the wind on my back, the showers that drove me down the beach seemed little bother and I thoroughly enjoyed myself as I walked through flock upon flock of gulls and seabirds all taking off with my approaching step.

I walked the beach with all inland landmarks hidden behind the dunes to my right. I knew that there were lines of expensive golf courses hidden back there somewhere, but as I had passed so many already I wasn’t overly bothered to miss a few. I was much happier spending my time strolling along ten miles of empty sand in the middle of a Site of Special Scientific Interest.

Eventually the sand had to stop as Aberdeen was lurking in the gloom. I made for the tarmac and the Bridge of Don for a meeting with the local press photographer outside a seafront ballroom. As I waited for the photographer to arrive I sat on the promenade eating my marmite sandwiches and counted 19 oil rig support vessels sitting at anchor out in the bay. Apparently it’s much cheaper to anchor out there than to cosy up at berth in the port.

With my ugly mug duly snapped, I continued down towards the harbour and around the quaint old cobbled streets of Footdee, neatly tucked in between the docks and the sea wall. The docks themselves were full and busy with their North Sea business and as I walked around to Torry the smell of fish became ever dominant. I was glad to leave the alien sounds of city traffic and industry behind. After my few months of idyll on the West coast it was a bit of a shock to my system. It was therefore comforting to be able to bypass Altens and find an unmarked path to hug the cliffs all the way to Cove Bay. 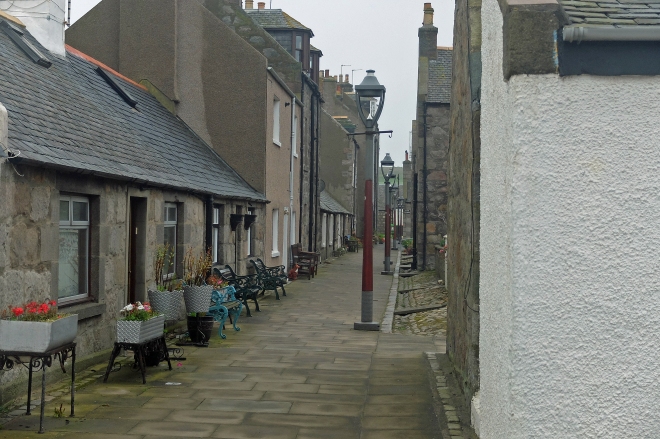 Today’s route plan didn’t really excite me and the weather continued to be dreary if a little drier. It was misty again and with everything an even flat grey I knew that decent photos would be a rarity. I attempted to follow the North Sea Trail, part of the Nave Nortrail project which set itself an objective to have a network of trails across many of the countries edging the North Sea coast by 2006. It looked as if the project must have foundered as the markings were often faded or absent and the paths overgrown or non-existent. Either way, none of it was marked on my map and the trail only worked for me now and again and it’s reliability was beginning to irritate. Twice I got stranded at cliff edge dead-ends and it often petered out into overgrown bramble and bracken. It is well documented that I do not have a predilection for head-high bracken even if it is beginning to die off, so maybe my irritation was justified.

To add insult to irritation I had picked the wrong boots for the day. With knee-high wet grass the best the path could offer, my feet were soon squelching merrily and I was relieved to reach the roads around the popular Stonehaven and it’s attractive oversized geometric harbour. It was but a short walk over the cliff to Dunnottar Castle and a strange but welcome request from a Japanese tourist to take his picture.  It was then lanes and a rather dreaded foggy walk alongside the A92 to Inverbervie and a very tired but welcome evening with Bob and a lasagne.

One thought on “Haar dee haar”