Just as it should be, it was a fairly quiet support crew change and rest day as I shipped Clive with my sincere thanks to Bridgend for his bus back to Northampton and stocked up on a supermarket cooked breakfast and supplies before heading back to the Porthcawl campsite to await old school and university pal Mags, her best friend Tracy and their little blue car ‘Snugs’. With three people ensconced into Snickers and a full onboard briefing completed – including probably unnecessary instructions on how to use the onboard loo – the evening was spent catching up on 25 years worth of news and gossip.

Yet more bright and sunny weather welcomed the morning as I skirted the expensive and exclusive links of Royal Porthcawl Golf Club, which seemed unusually devoid of golfers. The plush greens and fairways quickly became dunes and gradually morphed into scrub and rough hinterland as I ducked inland to dodge the steel and gas works of Margam and Port Talbot (photo). Margam could not be called a pretty place. The back-to-back terraced houses were not in the best of condition with their own back alleys coloured with graffiti and dotted with the odd discarded armchair and car part. Appearances can often be deceptive and indeed they were as everyone I passed greeted me with a friendly tone despite my very alien walking attire. 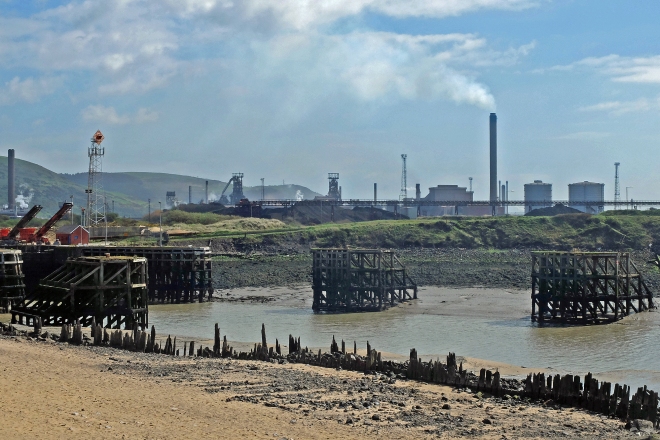 Along one of these back streets a ten strong group of similarly attired men and women spun around the corner in front of me and approached with broad smiles looking a little relieved not to be the only aliens in town. A quick chat revealed their walking plans and my project and within a minute I’d become a z-list celebrity as they snapped a few shots with me as the less than photogenic main attraction.

Port Talbot held little promise but actually delivered a nice little surprise in the form of Aberavon Sands but I was barely across them before I headed inland again to cross the river above the M4 at Shelone. It was on this path that I met up with Andrea and Julie who were clearly on a mission. A similar mission to mine so it seems as they too are walking the entire coastline of Great Britain. A good ole chat ensued as if it were a meeting of old friends and we exchanged website details before bidding farewell and bon voyage. www.coastwalks.blogspot.com

Back down at the coast I met up with Mags and Tracy who were hiding behind their dark sunglasses excitedly people watching a large and growing group of revellers sitting outside the bar opposite their hot chocolate serving cafe. They accompanied me down the beach for the last couple of miles and treated me to a very welcome free room at the local Ibis hotel (thanks Swansea Ibis!!!).

Having finally remembered to put on my boots, Thelma and Louise – as they now like to be known – shuttled me, for a second time, back to my start point. I spent the first hour dangerously casting an eye over my shoulder on the look out for MAMILs creeping up on me on the cycle paths of The Mumbles.

With yet more fine weather a proper coast path with the odd small but steep climb was a welcome change. The bays became increasingly picturesque with the perfectly aligned green and white-painted beach huts presenting an ordered Edwardian frontage adorned with planted palm trees.

The excess of breakfast bacon caught up on me and I just had to indulge myself with a Fruit Pastille iced lolly to satisfy my thirst.

At Three Cliffs Bay I discovered my favourite Welsh beach so far. Pobbles Beach has a name straight out of childrens television series and was just as idyllic with sharp cliffs enclosing neat and even rose-tinted golden sands. A further long walk across the tops of water-filled ripple marks in Oxwich Bay took me ever closer to the ice cream hut oasis at the far end of the beach. My bacon created thirst still needed quenching, so a Mr Whippy cone was supplemented with a bottle of lemonade.

From here it was even pathed and flat all the way to Port Eyenon where a final beach stroll took me to meet with Thelma and Louise for a rather greedy third ice cream of the day (mint choc chip) and a grand and very welcome gratis stop at a camp site overlooking the sea. It would be very remiss of me not to thank Jo Hill at Carreglwyd for her hospitality.

Oh come on….another sunny day in Wales. I’m beginning to feel guilty not to have worn my waterproofs for almost a week.

Today I felt very much like I was an all terrain vehicle or 4×4. It had a bit of everything with winding cliff paths, tourist trail tracks, sandy beach, dunes, salt marshes, green lush fields, muddy farm tracks and a teensy weensy bit of tarmac thrown in.

The Gower is somewhere I’d like to revisit as I felt as if too much scenery went by far too quickly and not enough soaked in. I know I missed out on caves, ship wrecks, nature reserves and castles, but if I’d stopped to see everything I’d be on this walk for two years.

Approaching Rhossili I was met by hoards of midday visitors making their way to inspect the exceptional view towards Inner Head from Kitchen Corner. My mum had forewarned me of the beauty of Rhossili Bay (photo) and I was not disappointed. It was a stunning and very long expanse of nigh on perfect sand. But, for me, it was crowned by the tiny hidden beach at the far West end of the bay at Cat Hole which matched Pobbles Beach for sheer beauty but wins on my part because of its remoteness. 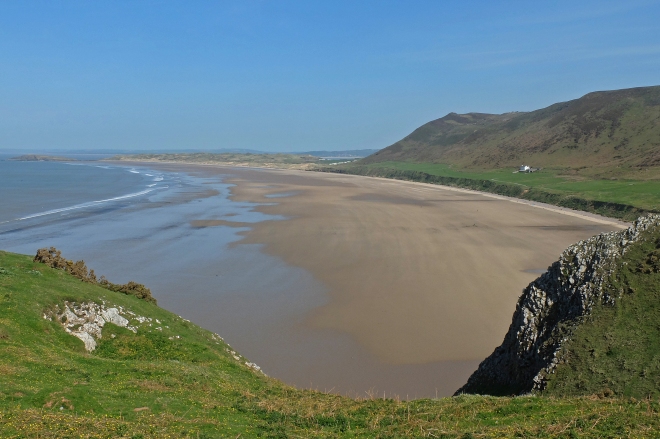 Heading East the beaches became dunes before I began what would become a long circuit around the mud flats and salt marshes squeezed between the North side of The Gower and the mainland. I finally crossed the deep grassy fields and approached Llanrhidian to find Thelma and Louise hiding around the back of a closed pub sunning their wintered legs and waiting to fill an empty glass. It seems as if their day had held more than a modicum of entertainment. In searching for a stopover they had met fearsome Elizabeth, a man with bizarre hair who reminded them of a character from the movie ‘Deliverance’ and conducted a battle between Snickers and a VERY wide load (photo). But they had successfully negotiated another great stopover and for that I must thank all at Kennoxstone Farm. 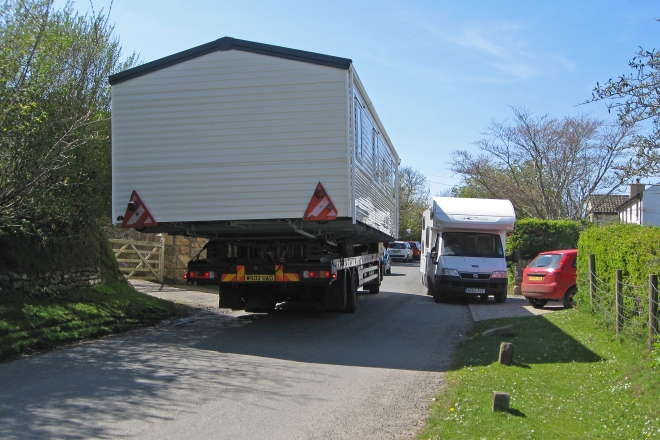 After yesterday’s variety, today promised little. Unfortunately, it delivered. A flat traipse alongside salt marshes and mud flats gave way to miles of tarmac. The Wales Coast Path tries to avoid the stuff, but unfortunately I’ve seen too much of it already so I tried to soften the demands on my feet and keep them cool on – yes another – sunny day, by walking along the dog-poo laden verge.

Eventually I crossed the estuary to face neat housing estates dressed in my hiking finery and once again standing out like a sore, no broken, thumb.

As I approached the National Wetlands Centre for Wales I parked myself at a bench to eat my pork pie and marmite sandwiches and had a grand chat about Bass fishing with an old gent in his chest-waders as he set up his fishing kit for an afternoon on the mud flats. From here it became a long less than thrilling walk along the cycle path around The Millenium Coastal Park with its broad coloured tarmac and lottery funded bridges.

A meet up with Thelma and Louise brought the best bit of the day as I finally had a small expanse of sand to walk across and a 99 cone as just reward for a pretty dull day.

3 thoughts on “A little bit of everything”