Stage 75, 18th May: Greenfield to Burton

Things were looking up with another dry warm day with a lovely cooling breeze on the cards. But unfortunately the scenery wasn’t quite as inspiring as I got to Flint with yet another ruined castle and not much else to see other than the channels etched into the mudflats, a hazy view of the Wirral peninsula and the distant chimneys of the power station at Connah’s Quay.

When I got to Connah’s Quay a car pulled up alongside me with smiles beaming broadly. I had expected Matt to turn up at sometime and he emerged from the car with his family and greeted me as if we were old friends. Matt and I had never met before, but he had followed my progress via my tracking beacon and was now officially my first fan.

He and his cousin walked with me for a couple of miles as we chatted about my walk and his plan to do likewise in a few years time. It was great to have company again as the scenery wasn’t much to write home about and we crossed the River Dee together thinking I was saying goodbye to Wales. We had parted company before I realised I still had another 2 miles of Wales left and I crossed into England down a very anonymous farm track (photo) with the only confirmation of England being a fading Cheshire County Council planning notice hanging limply from a white post.

Any doubts I might still be in Wales soon evaporated as the first village confirmed that leafy Cheshire wealth was on show in abundance and that a quaintly named Puddington Hall was confirmation that the English middle classes were in residence. As I passed by a few archetypal and undeniably pretty cottage gardens I was viewed by secateur wielding ladies with suspicion and almost certainly as someone checking out their valuables for a future burglary plot.

With the prospect of John parking the motorhome in their village….I cringed at the thought. Even so, we headed over for a night at Pete and Angie’s driveway and a barbecue with their family, good pal Rik along with Chris and Gwyndra who had taken the opportunity to come over from Leicestershire to meet up with me and to chat about what we can collectively do to help raise the profile of my fund-raising efforts for the MS National Therapy Centres and the Spinal Injuries Association.

It was pleasantly warm again as I continued my trek deeper into the Wirral. A well-worn path took me along the marsh edges of Neston and Parkgate where, following a Twitter recommendation, I just had to stop at an apparently famous ice cream shop. I say apparently because I hadn’t heard of it. But I can vouch for the ice cream. My toffee / rum & raisin double cone was mighty fine. At Heswall I joined the Wirral Way and its designated paths for cyclists, pedestrians and horses. The cyclists and the pedestrians are meant to share, whilst the horses get a little track to themselves. A quick recommendation and top tip for pedestrians – share with the horses, they are far less dangerous and also much less offensive to the eye.

The Wirral Way is, for the most part, absolutely bone straight, tucked in among the trees and often within inches of back gardens and houses completely invisible from the path. Therefore I can’t vouch for any spectacular views or even vague excitement other than the occasional wince at the various lumpy bits of human anatomy packed into lycra and cycling past.

At West Kirby the Wirral Way became streets with cars, shops and pavements again and as I turned onto a path edging the municipal golf course I came across an ageing chocolate labrador who greeted me with wagging tail before introducing me to his owner. We walked along together for a few hundred yards chatting about my walk and his involvement in the Spinal Injuries Association and we found a common bond through him knowing my pal Graham. We parted as his dog decided to end the conversation by squatting in the verge. I offered to pick up the dogs deposit but my new friend declined and deftly bagged it from the height of his wheelchair with a nifty little scoop.

This area is definitely golf heaven with a course at every turn, yet at Hoylake I managed to miss walking alongside the Royal Liverpool, home of this year’s Open. But at least the yellow AA signs were out in abundance and preparations were clearly well underway.

I ducked down for a brief beach walk and with the rising tide I went up onto the promenade and along Wallasey Embankment feeling very drained with a bit of a head cold taking its toll. Fortunately it was a short day and I was cheered enormously back at camp when Maggie and Bow turned up at the van with a lovely cake and some homemade jam and marmalade. I had previously met them both for no more than a ten minute chat on the coast path back in March somewhere between Port Isaac and Tintagel and for them to remember me but also follow my progress was very kind and extremely welcome.

I really wasn’t looking forward to today’s walk through Liverpool, but I was delighted to be proven wrong. Out of Hoylake and continuing along Wallasey Embankment this time the tide was out and I was able to drop down onto the beach for a warm and muggy walk all the way around to Wallasey itself before having to mount the pavement again and head down the promenade to Seacombe for the ferry across to Liverpool.

I resisted the urge to hum or whistle Gerry and the Pacemakers’ song as the Mersey was crossed but I needn’t have bothered as they played it on the ferry anyway. With the Liver Building still dominating the skyline Liverpool was looking a very fair city as I disembarked and made my way out of town.

Gradually the grand facade of the city faded as I headed out alongside the many docks lining the river. Some of the older wharfs and warehouses were truly impressive and even in its advance state of decay the Tobacco Warehouse couldn’t fail to impress me just in terms of its sheer size. But as the older dock buildings melted away and were replaced by more recent equivalents, the whole place became decidedly tatty. Eventually I arrived at the more modern entrance to the Port of Liverpool north of Bootle and took the Sefton Coastal Footpath from the boating lake at Crosby and down to the beach.

The beach near Crosby was “another” surprise. I had forgotten all about Anthony Gormley’s ‘Another Place’. The iron life-sized male figures geometrically buried into the sand all look thoughtfully out to sea and, for once, I find the work highly thought provoking. I’m not your greatest art lover or critic but I do love something that makes you think and the number of photographers on the beach also made me consider how Mr Gormley’s figures have evoked a creative instinct in many others to interpret, present and reinvent the figures in a completely new and personal way. All in all a fascinating end to a day of enormous variation and interest and surprisingly the most beach walking in any one day so far. 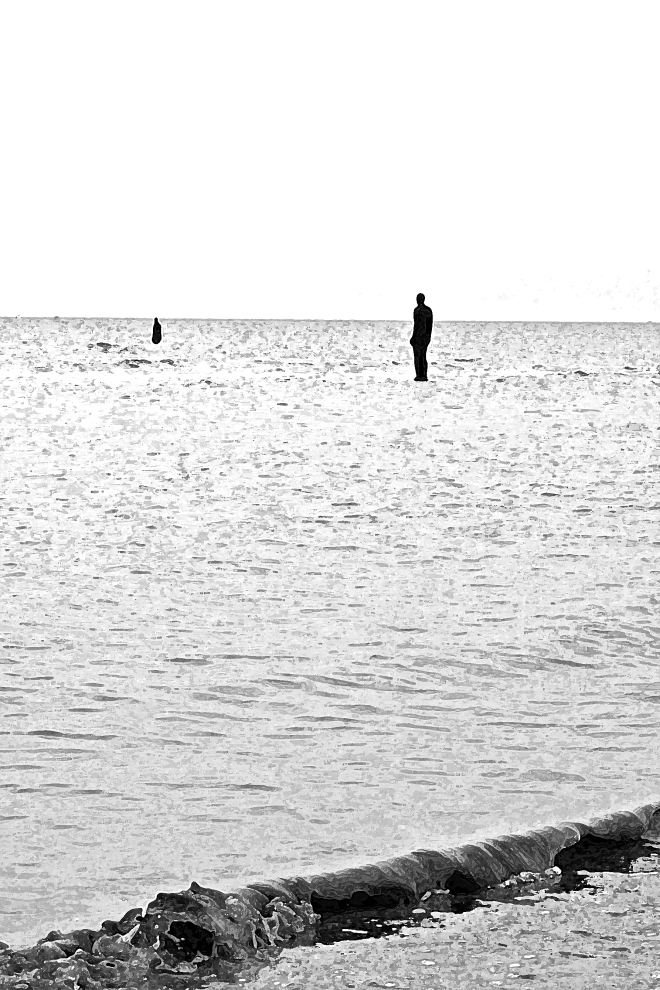