Light but persistent rain accompanied me around a large gas terminal and old derelict works into Barrow-in-Furness. For a change I headed into the High Street as I also needed to do some banking. It was much as any other shopping centre in towns across the country with the usual names and drab familiarity. As I left town the same familiar supermarkets and warehouse shops made their appearance and I found it a little depressing that most towns seem to have lost their identity and character through the dominance of such corporate chains.

I finally dived away from the road to walk across the sands to Askam which involved a good rock scramble to get around the headland at high tide. I sat down and took shelter from the rain under a disused bridge for a sandwich lunch which I tried to share with an aging border collie who passed my way. He didn’t like marmite and looked at me a little forlornly as I had little else of interest other than a banana to offer.

The rain eventually abated and I walked alongside the now very familiar railway again through the marshes at Sand Side. My progress was slow as I had to zig zag my way through the bogs and mud before finally finding small lanes to follow up to the apparently historic market town of Broughton-in-Furness. I did think it strange how all market towns seem to be announced as historic and thought it was more than likely that every town has some history of note, some of it probably quite scandalous or gory. I therefore concluded that if every town tries to shout about their history it almost certainly becomes lost in a sea of voices and the town remains wholly anonymous. I also concluded that my train of thought was beginning to lose the plot in examining such trivia and that maybe I should listen to the radio or something.

Duddon bridge saw my third Cumbrian estuary topped and then gave me half a mile of hell as I ducked my way down the A595 just waiting for a wing mirror to clip my arm. Fortunately a few lanes and fields came to my rescue just as I began to audibly mouth a few choice words at drivers cutting it a little fast and fine for my liking and I headed to meet up with Terry and Alfie at another rural railway station.

My favourite overcast, cool but dry weather gave me a great start as I set out from one station on the coast railway with a plan to rendezvous at the end of the day at another. I had crossed and re-crossed the same railway line for days and was convinced that even the train drivers must recognise me by now.

Millom and its old disused and derelict iron works was a fairly desolate place and Haverigg with its neighbouring prison didn’t really brighten things. By Silecroft the depressing landscape was improved by a beach walk, even if it was shingle. I progressed at ever decreasing pace as the shingle became deeper and coarser until the pebble banks led me to lanes around the MOD range at Eskmeals with the occasional huge thump and whistle of artillery echoing across the estuary.

When I came to cross the river the nicely marked ford on my map proved to be a mud slide and a chest deep wade. Fortunately a scaffold bridge was attached to the side of the railway viaduct, so after a begging request of the painting contractor’s foreman  I was able to get across without sinking without trace into brown slime.

From here on in mud and shingle were aplenty with another walkable viaduct at the village oasis of Ravenglass. The last river of the day to cross was also marked as having a ford. I approached with little confidence of being able to cross. My lack of confidence was well founded as my walking pole nigh on vanished when I dipped it into the mud at the river bank. I elected to back track and find a bridge up river even though I was only a few hundred yards from my end of day rendezvous with a pint of Jennings Cumberland waiting. The pint was worth waiting for as the beer at the Victoria Hotel, Drigg must have been the best beer I had tasted for a long time. I just had to have another.

Another dry but overcast morning saw me off along the lanes and cycleways topping the shingle beach of Seascale with the nuclear reprocessing plant at Sellafield looming ever closer. By the time I reached Sellafield the plant’s absolute dominance of the entire landscape was complete and the perimeter was made up of multiple lines of tall prison mesh fencing topped with rolls of razor wire and sterile zones between each line. CCTV cameras pointed in every direction and police were everywhere, many of them armed particularly at the main gate. The whole place had an air of hostility and though I was tempted to walk by wearing a bright Greenpeace T-shirt I thought better of it and instead I slipped by as anonymously as I could, sneaking a couple of discreet photos without breaking stride. 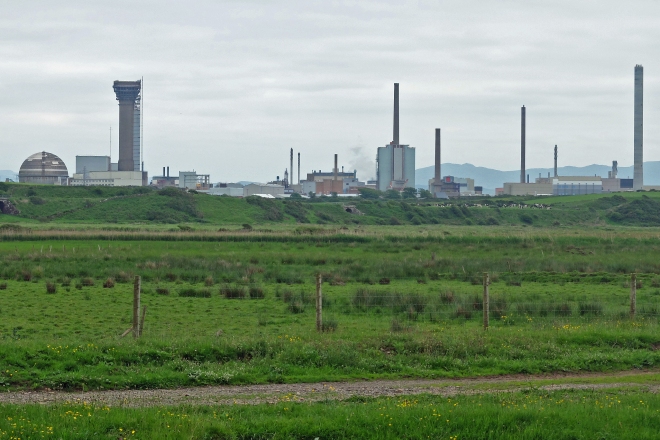 By Braystones I was back on a fairly grim featureless shingle beach which seemed to be lined with what looked like rough shacks, though I’m not sure whether they were genuinely rough or just ravaged after a winter of heavy storms. From St Bees I finally got a cliff top walk, my first since mid Wales over three weeks ago. It was a very welcome change and brightened the landscape considerably after the eye-sore of Sellafield. The heavy ammonia smell of guano over the cliff top was gripping and not pleasant, but my first sight of nesting Fulmars, Kittiwakes, Guillemots and Razorbills was worth the pungent introduction.

The cliffs flattened out as I approached Whitehaven with its well populated small marina, yet the town seemed otherwise quiet. Whitehaven then introduced me to work in progress as brand new finger posts announced the arrival of the England Coast Path, my first sight of a long-term project to match Wales by having a footpath right around the country. England are a long way behind and though I might have walked a number of disjointed english coast paths I’m not convinced it will be completed too soon.

I eventually met up with Terry and Alfie at Harrington railway station, only to discover Kate hiding in the van, a very welcome and grand surprise. We returned to Drigg for an evening in the Victoria Hotel for a well-earned and equally well portioned meal with maybe the odd accompanying pint of Jennings to celebrate 143 miles in six days. The landlord, Gordon, and his customers were not only exceptionally friendly but were equally generous to the cause and the whole evening was tops.