I don’t think Ray or I ever got to the bottom of why all the farmhouses were deserted, but we blamed economics and somehow found a reason to blame the EU subsidies too – but I’m really not sure how we managed that. Nevertheless a bright, sunny day set me off to the author of ‘Ring of Bright Water’ Gavin Maxwell’s monument and then I dropped down to cross a short gravelly section of Monreith Bay. I then rejoined the A747 for three miles into Port William where I lingered a little longer than intended chatting to an old woman at her front door, dressed in her blue gingham apron. She wanted to talk long and hard about one of the upcoming referendum ‘Yes’ campaigners who had doorstepped her last night and how she gave her short shrift belittling Alex Salmond in the process. It didn’t take much to guess that she was a ‘No’ voter.

Eight more miles of road walking took me to Auchenmalg Bay where I sat down for lunch only to be eerily engulfed by a chill sea mist which rolled in from nowhere. It came and went quickly and Dunfries and Galloway (DnG) then gave me another glimpse of what could be when I climbed over the hill for a lovely three-mile section of coast path.

Too soon I was down on the lane again and up onto the A75 to anonymously celebrate my 2,000 miles in a typical DnG way (photo). With seven more miles of fast open road around the MOD bombing range at Luce Sands, tedium set in and I was truly happy to find Snickers parked up where Ray had left it for me in a farmyard.

A cool but sunny day offered even more lane and road walking – or did it? I was soon out of Sandhead with its rather large and domineering caravan park and I was pleasantly surprised to find that the Rotary Club of Stranraer had put together a few odds and ends of a path alongside the road down to Drummore. I gladly used them, though it didn’t look as if anyone else did as they were severely overgrown in places and my walking pole doubled up as a machete again.

From Drummore and a very quick Mint Magnum, it was only a short lane and track – yes track – walk to Port Logan. I had elected not to walk all the way down to the Mull of Galloway as it would have involved retracing my steps along the only road and that’s not something I ever like doing. And anyway – it’s in my rules.

I arrived at the pretty remote harbour village of Port Logan (photo) bang on time for my scheduled lift back to Snickers. Unfortunately there was no lift. I waited for an hour and with no phone signal I headed into the village to seek a landline. Thankfully, the first person I spoke to, Margaret, offered me a lift without hesitation. I would have loved to have said how friendly and generous that was of a local – but she was from Worcestershire. 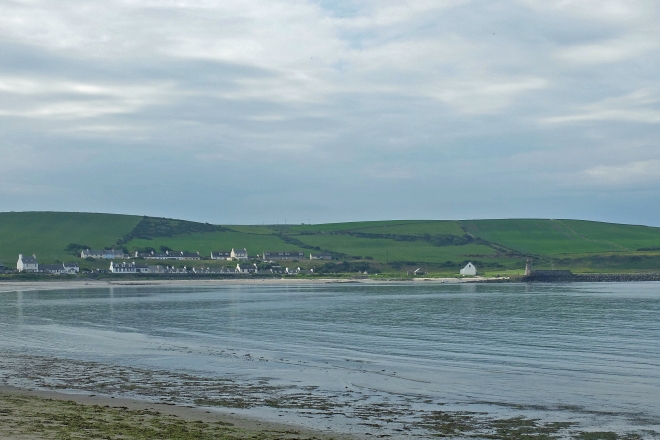 Nick – my third chaperone of the week turned up at the campsite, looking stressed and apologetic. After a heavy and unexpected day with the VAT man – he was forgiven.

Nick arrived bang on time in the morning to take me back to Port Logan and Snickers on to park up at his pub in Stranraer (The Swan Inn). It was warm, muggy and overcast but not uncomfortable for a day on the lanes again.

The empty lanes took me through hamlet after hamlet of familiar farmland and I was glad for the company of Aggers and Blowers as I eagerly plugged my ears in for Test Match Special and Joe Root scoring his double century. Eventually I came across a coast path sign. It wasn’t on my map, but I gave it a try just to ease the boredom. It was well worth the detour as I passed secluded houses tucked away on the beach at Morroch and the ghostly remains of Dunskey Castle (photo). Once again I couldn’t help think that DnG was missing a trick by hiding its coastline so well.

Once into Portpatrick, the coast path had warmed by blood enough to savour an ice cream. I eyed an unusual flavour worthy of a fresh tasting and decided upon an Irn-Bru cone. The woman in the shop kept me for a while as I nodded in agreement re the plethora of wealthy ‘incomers’ buying up the pretty village houses and then barely using them as holiday homes. It sounded a very familiar Cornish tale, but at least it gave me a chance to clear my palette of Irn-Bru and have a raspberry ripple cone as well.

Portpatrick marks one end of the Southern Upland Way – Scotland’s coast to coast path. Fortunately it ran up the coast for a bit, passing some hidden coves with chain edged paths climbing up over the cliffs. Eventually this path too ducked inland and I followed it into Stranraer for an evening parked at the Swan Inn in the company of my host Nick and his customers who generously filled a glass with cash for me as I quickly caught up on the World Cup with a rare but welcome pint in my hand.