A shortened day was planned to compensate for an extra few weather juggling miles completed yesterday. In other words, today’s forecast was worse than yesterday. I have often tried to take advantage of the weather forecast and lengthen or shorten days accordingly. The only objective I have always really wanted to maintain has been that I compensate to be where I planned to be for the weekend and the support crew changeover. So far, it’s worked.

However, rain dodging hasn’t been possible for the last month and once again I stepped out into the now obligatory light rain. It was entirely a road walking day and with only a couple of unknown headlands with dead-end roads I couldn’t afford to venture off-piste with the possibility of not getting through, particularly when the rivers were so full and the ground so very wet. I would have to do so tomorrow to Cape Wrath, but I couldn’t gamble with my schedule today.

The rain soon eased and it brightened enough to actually warm my bones enough for me to remove my woolly hat. The road was still open, empty and fast and I spent the time thinking up a challenge for the Top Gear presenters and I reckon I came up with a good one that Mr Clarkson would definitely lose.

Sadly the scenery was as grey as the featureless blanket of cloud which covered it and I felt robbed of views and photo opportunities. By midday the rain closed in again enough for me to don the waterproofs for a soggy walk away from the main road and down the side of Loch Inchard. The last seven lane walking miles took me through the rather downcast fishing village of Kinlochbervie with its oversized fish market, noticeably devoid of activity. The next villages of Oldshoremore and finally Blairmore told me that wilderness was approaching and you could feel it.

My journey out to Cape Wrath was always a little daunting. My worries had mainly been about military activity on the bombing range up there and not being able to cross MOD land. But a check a few days previously had cleared that obstacle and now it was the recent weather which gave me concern. The overnight rain had been phenomenal again and I not only knew that the rivers and streams would be very full, but so would the bogs and marshes. With no marked paths to follow and a heavy rucksack to carry for a night out, I expected a tough day.

Jeff accompanied me along the first couple of miles of track North towards Sandwood Bay. When we reached a loch now overflowing and straddling the track, he turned and headed back waving me a farewell as I picked my way around an early obstacle offered up as an easy starter.

After a brief meeting with two German guys on their way out, who had elected not to go across country into the Northern wilderness, Sandwood Bay welcomed me with splendour.  I was alone on a beach with pristine sands to die for and the stack at Am Buchaille just had to get some photographic attention. The river flowing out from Sandwood Loch was a torrent and to cross my second obstacle I had to remove my boots and wade, keeping close to the sea so that I could span the flow as it spread out into a shallower manageable depth. The bay had more to offer as the climb up the cliffs presented more stunning views and I paused more than a few times to admire the spectacle.

From here the terrain became a little more challenging and with no marked path I had to resort to old fashioned methods of contouring around hillsides to pick my way around saturated bogs. I took aim for a footbridge spanning the river at Strathcailleach Bothy. It was clearly marked on my OS map, but in reality there was not even a sign of it ever having been there. The river was in full flow and I wandered up stream for half a mile before finding a vaguely safe place to cross. I made the last leap from a slippery midstream rock and crossed with only one wet leg to spoil the success.

From here it was a succession of tricky bogs, streams and more bogs to cross and navigate through or around. To add to the now soggy toes, I was hit by a succession of squalls coming through to batter me head-on. By the time I reached the track to Cape Wrath lighthouse I was close to exhaustion but also exhilarated at having made it through. The squalls gave me a break and I reached the lighthouse with dry trousers and a modicum of respectability. I was greeted in silent anonymity by ambling tourists plus Jeff and Jenny who asked what had taken me so long and snapped a couple of pictures of my bedraggled state before boarding their minibus bound for the ferry to Durness. They drove off and I was left to wander four miles back down the track for a night at Kervaig Bothy.

To arrive at Kervaig is to arrive in one of the most peaceful and beautiful places on earth. As I turned the corner down the steep track the small sandy bay opened out before me. Edged by steep cliffs and fed by a winding, fast flowing river the former white painted croft was all mine….and I didn’t have to pay a penny.

I would have paid top money to stay in a place as gorgeous as Kervaig, even if it didn’t have a bed, toilet or running water. But it did have enough fuel for a fire and after a filling pasta meal I made my bed on the floor infront of the flames and watched as my boots steamed their way to sleep in the light of the glowing embers.

My exhaustion of yesterday had sent me to bed by sunset and I woke early. With first duty of the morning due, I opened the front door to venture outside. I was greeted by a pair of black beaded red deer eyes not a cricket pitch length away from me. Equally shocked, we both stood and stared each other for what felt like minutes. By the time I had the nowse to reach back for my camera she had gambolled off to join her friends who had congregated around the bothy and had clearly spent the night silently chewing the cud within yards of my oblivious self. With no sign of a single stag, I assumed that they had now broken away from their groups and were now preparing for the rutting season. Autumn must be approaching.

I collected water from the stream and after a light breakfast made my way back to the track for the eight mile trek to catch the ferry across to Durness. The weather was cool but bright and within the hour the solitude of last night was broken by the minibuses taking tourists to the lighthouse and a pack of cyclists on the last leg of their Dover to Cape Wrath marathon. The buses all stopped for a chat and Stuart, the driver who had escorted Jeff and Jenny to the lighthouse stopped for a second time as if we were the oldest of pals. Once again the remotest places had offered me the friendliest people.

After a leisurely hour waiting in the cool sunshine, John the ferryman took me and some of the clearly happy and relieved returning cyclists over to Durness. I briefly met up with Jeff and Jenny to dump my rucksack for a lightweight afternoon around Feraid Head. Please excuse me the nerdyness of this next bit: The geology had starkly changed the landscape and the hard Pre-Cambrian Lewisian Gneiss of Cape Wrath now gave way to flatter more fertile land of the Cambro-Ordovician Durness Limestone. The prominent headland of Feraid Head is comprised of harder Moine Series metasediments and is joined to the mainland by Scotland’s largest expanse of dunes and corresponding deserted sandy beaches. A high point cairn at the North end of the headland gave me one of the best 360 degree views I have ever had as the headland narrowed back towards Durness.

A few squalls caught me and soaked me from the waist down as I waded through the wet marram grass of the dunes, but with the squalls short lived and a good drying wind it was only ever minutes before I was dry again and ending the week on a high with Jeff and Jenny meeting me at the camp site in Durness.

With Jeff and Jenny on their way with yet more profuse thanks and a very long journey home, Cousin Mike returned for a full three weeks of further punishment in my company following an even longer journey from Exmouth. Having thought he’d had the longest journey to support me, he considered jumping off the cliff into Sango Bay when I told him that John D had travelled from Oman for a week with me around Liverpool. Nevertheless it was grand to have him back on-board and together we did some stopover reconnaissance with a drive over towards Tongue and he allowed me a little family holiday reminiscence from the 1970’s as we visited the Melness headland and Port Vasgo. Unfortunately I was due to cut across this headland as I couldn’t find a legitimate route around it, so at least I had a chance to see it for the first time in 35 years. 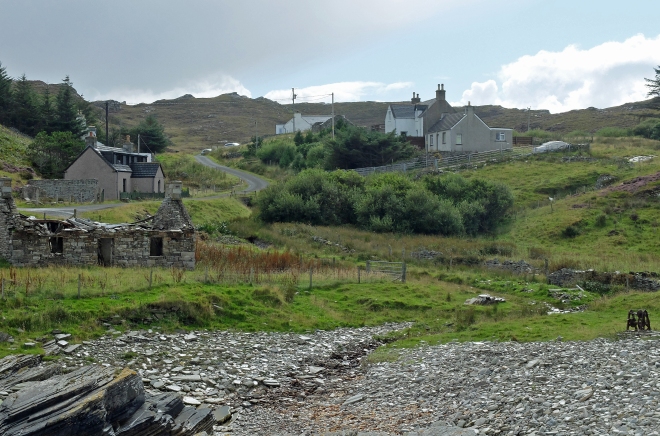 One thought on “Goodbye to the West”