For anyone who might actually read this blog and tot up my ice cream intake, it was most remiss of me to forget to mention my Magnum in Munlochy on the 5th. I also suspect I forgot a very early ice cream back in Devon when I vaguely remember a rather nice honeycomb cone that failed to get a mention. That’s it I think. The ice cream register should be well and truly up to date. At this point, I feel I have to admit that I am by no means the champion of ice cream eating coast walkers, not by a long way. Nat Severs surely holds that crown and I suspect nobody will ever come close. His blog charting his walk back in 2010 is a good read, he managed his 7,000 mile feat in an incredible time and makes my efforts look a little namby-pamby in comparison.

Fortunately the heavy rain forecast had blown through overnight but the clouds hung heavy overhead as Kate and I spotted a couple of dolphins out in the bay just as I set off from North Kessock. It was but a few yards up and over the Kessock Bridge to skirt Inverness and the football ground of Inverness Caledonian Thistle, a great name for a club and my adopted favourite Scottish football team, who, as I write, just so happen to be top of the table – until Celtic find their form. I crossed over the A9 to head East and took to some waste ground, well that’s what I thought it was. It turned out to be an old landfill site with pipes crisscrossing it at trip height collecting the gas bubbling through the mounds of rubbish buried just inches below my trampling feet. I don’t think I should have been there. Oh well.

Once I had established that the soles of my boots hadn’t melted away, I rejoined lanes across to Milton and onto the verges of the A96 for a few miles. It was grand to escape another ‘A’ road and I was soon back on the lanes and diverting briefly towards Inverness Airport for a coffee with Kate. After a fond farewell she headed back South to find out whether her mum still had some sanity after a week house sitting and the company of two chaotic Golden Retrievers.

From there it was back to the lanes for Ardersier and the operational garrison at Fort George, which was hosting the Highland Military Tattoo and had a heavy military presence who were all sporting their normal camouflaged fatigues perversely accompanied by hi-viz yellow jackets. As a result, I skirted the fort and continued on a now deserted lane around the ranges and on to the even more deserted and very eerie Port of Ardersier, formerly a huge oil platform construction yard. Apparently there are plans to turn it into a ‘super-hub’ offshore wind manufacturing facility. Manufacturing wind is a new one on me. Maybe they are planning to build a huge set of electric fans that look a bit like all those white elephants we seem to plant with good intention on every available hill-top that pretend to save the planet by generating the power to run one small light bulb. Ooerrr…..I’m off on one again.

A bone straight equally deserted two-mile road then took me away from the old port and back to the A96 and the last few miles into Nairn, the self-dubbed Brighton of the North……ehem. As I trudged the last couple of miles I couldn’t help but try to think up better uses for the old port – maybe a film set, a sports stadium, another new parliament building, or even a grand spot for Scotland to host the olympics.

Things had become much flatter now. Mountainous backdrops seemed but a distant memory. So it was as I took to the sandy beach from Nairn before ducking inland to find a way up the estuary and cross the Findhorn River. In walking the tracks of Culbin Forest I noticed how autumn was slowly taking hold as colourful fungi sprung into life in the forest litter and track edges.

I emerged onto a lane and quickly came across a friendly couple from my neck of the woods in Leicestershire. They had upped sticks and were living in a caravan as they set about demolishing a derelict house and building new. We chatted enthusiastically for twenty minutes about the many virtues of Scotland and its people and I almost had to tear myself away from a familiar accent and lovely easy chatter.

The Findhorn River showed me some now familiar signs of Bertha’s recent visit. Clearly the normally large river had been gigantic a few weeks ago. The huge size of some of the trees, rocks and debris now beached at the top of the river bank or in the middle of a newly created rocky scar demonstrated once again just how much rain had fallen over such a short period.

More road took me up through Kinloss and turned North towards Findhorn. I would have liked to have lingered at the Findhorn Foundation spiritual community and eco-village, but I suspect I would have stopped a little too long to steal ideas and Mike would no doubt have worried about where the hell I’d got to. So I resisted temptation and stepped on into the old village of Findhorn itself. Findhorn had a Cornish fishing village feel about it, with pubs that deserved a few flagons of warm ale and good sea shanty. It was then time to turn East again, up and over the low dunes for six miles of sand swinging around Burghead Bay with its marooned pillboxes and concrete block war defences now lining the middle of the beach and eroding rapidly with every tide.

A day with very little road walking was a blissful thought. Now the Moray Coast Trail would keep me company and the reward was a day of great variety. A bit of cliff path, a section of cycleway tarmac, a few dunes, a long sandy beach, the odd mile of shingle and a few small harbours thrown in for good measure. Sounds like a perfect day.

A huge maltings warehouse dominated the Burghead skyline as I again turned purposefully East. Soon the sandstone arches and stacks along the Permo-Triassic cliffs took over and stayed with me to the village of Hopeman. From here the landscape gradually flattened until a sandy beach took me to Lossiemouth and its busy military airbase. Very expensive warplanes were repeatedly circling and practising their final approaches time and time again. I lingered a while under the flight path at the end of the runway savouring the rough deep roar of their jets as they kicked the thrust back in to speed away each time they came close to touching down.

Lossiemouth itself was a busy and pretty small town, no doubt bouyed by the affluence of the airbase activity on its doorstep. It also had a stunning beach continuing both East and West from the town. As I wandered East and peaceful remoteness slowly returned unfortunately a rather proud but also very nude bather made his unwelcome appearance. There are bodies which are designed to be naked and unfortunately the human body isn’t one of them, particularly dangly male bodies. So with my eyes averted, if only to avoid awkward conversation, I strode on down the beach.

With the soft sand slowly dissolving into banks of shingle, I made my way to the back of the beach and a dune-side path. Arriving with the shingle was more of the long defensive wall made up of large equally spaced anti-tank concrete blocks with periodic pillboxes. These World War Two defences were put up when invasion from the direction of Norway was seen as a real threat. The wall stretched on for miles and with what I had already seen yesterday it seemed as if Britain had, once upon a recent time, taken its threats seriously. The Great Wall of Moray maybe? The wall ended abruptly with the arrival of the Spey estuary. For me it was a quick turn inland to cross the old railway viaduct and a walk around the headland again to meet up with Mike camped up alongside the ubiquitous seaside links golf course. 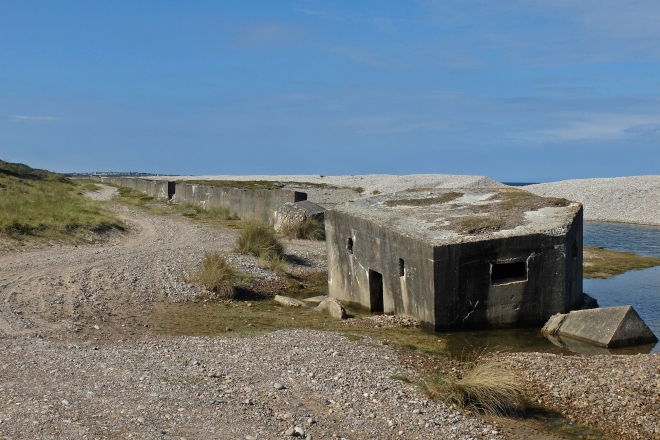