With Woody having accompanied me most mornings last week it was now Sue and Diesy’s turn to join me for a few miles down the sands around Seaton Sluice and on towards Whitley Bay. In doing so we ran the gauntlet of literally hundreds of other dog owners all out for their Sunday morning beach stroll in the autumn sunshine. I had never seen so many poo-bag carriers in my life and a level based computer game idea (based on attempting to get a dog safely from one end of the beach to the other without any mishap ©peterhill) became a strange topic to discuss as we strode towards the Tyne.

Back on my own again, Whitley Bay merged into Cullercoats and thence to Tynemouth where I bumped into Phil (a prospective coast walker and blog follower) for a quick hello and a chat. Those sort of meetings have always been great for my morale and I have found any enthusiasm for my bizarre quest a great boost when things aren’t so great. Tiredness had certainly been creeping up on me over the last few weeks. 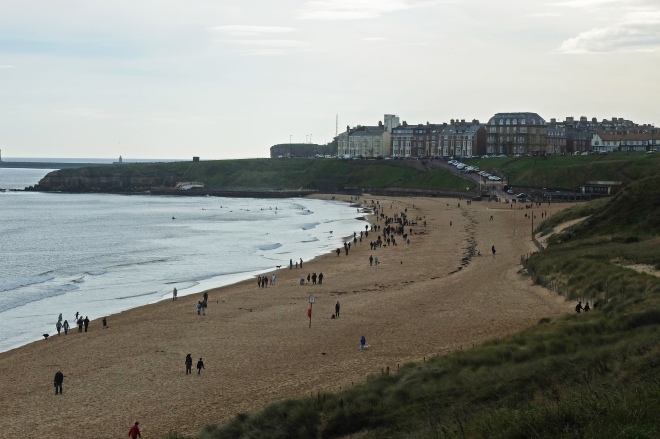 I then turned briefly inland for a sanitised walk up the Tyne. North Shields was now populated with cafes, bistros and miscellaneous but popular eateries, rather than the rough run-down old docks I would have expected. As I crossed over by ferry to South Shields a similar story unfolded as I was greeted by flashy dockside apartment blocks and quiet residential cul-de-sacs. It was a little disappointing not to find the docks I remembered from 30 years ago, but clearly the outskirts of Newcastle and Tyneside had moved on from the three brief years I spent up here with the luxury of a free university education and a student grant.

A low cliff top walk took me around to Whitburn. It was all rather pleasant with so many out enjoying the Sunday sun, whether it be a beach stroll, a promenade amble or a roam along the cliff top. This had been a people heavy day, though communication had been very light or non-existent. Only my strange hikers attire had raised any reaction and it was barely more than a raised eye-brow or a mistrusting sideways glance.

Kate’s weather forecast from home had become quite predictable over the last few weeks. After my very wet August came a very dry September and something was bound to break eventually. Today Kate broke the news as gently as she could but the weather broke big time. Not only was it persistent heavy rain but strong blustery winds were buffeting my face and slowing every forward step. It would have been lovely to see what was around me but most of the time I had my hood up and my head down to watch one foot in front of the other.

A very brief respite from the wind was offered as I made my way up the Wear estuary into Sunderland but the rain didn’t abate and I suspected that Sunderland missed out on a photo opportunity or two as what I could see looked more interesting than I had expected. Nonetheless I was quickly back out onto the exposed cliffs with all my hatches battened down with the occasional peer up to check that I was following the now very welcome and very new brown England Coast Path signs. It might be an incomplete project, but it certainly eased my navigational conundrum for the day.

After Seaham the old collieries around Easington took me along a supposed Heritage Trail. Unfortunately the heritage was lost on me beyond the appearance of the slowly recovering black beaches somewhere down below. Nature, of sorts, was slowly returning. Possibly not the nature that was originally there, but it was nature nonetheless and though it hadn’t completely obscured the grim industrial presence of the past, it was clearly trying. Sue and Diesy met up with me at Denemouth looking decidedly bedraggled and we headed for camp at Crimdon like a small pack of drowned rats. 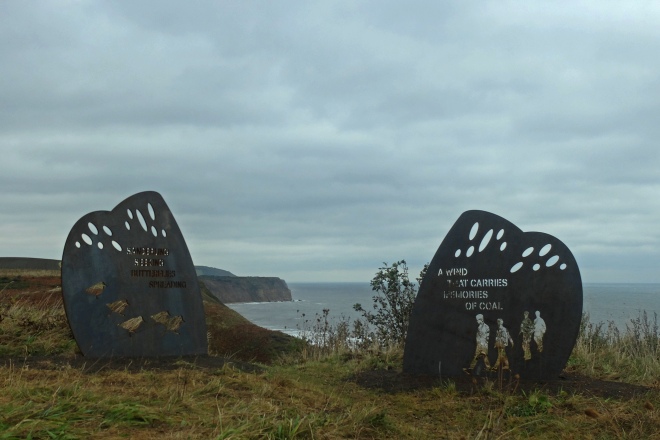 I was expecting a few industrial views today and to my relief the weather brightened considerably and I didn’t have to suffer the chemical and steel works of Teeside with the added bonus of rain sheets. So I set out along the cliff top to Hartlepool missing a perfectly good beach and instead followed the official marked trail to walk across Hartlepool Golf Course and the flattened wasteland that was once North Sands Works.

Hartlepool had a big harbour museum and marina with plenty of new development work in various states of completion nearby. It was clearly trying to reinvent itself and the project was still in progress. I can’t say I was impressed but I can’t say that I was disappointed either. I had seen plenty of dock and harbour improvements on this trip and the fashion for such waterside improvements doesn’t seem to have lost momentum. I had probably just become accustomed to them and maybe become a little blase.

From Hartlepool the works of Seal Sands and Teeside loomed ever closer. I crossed Seaton Sands and circled another golf course before dipping inland for the Tees estuary, heavy industry and bland pathless roads. I briefly stopped for lunch by a bridge over a small tributary and some mud flats. Wildlife came to the rescue as a small colony of seals basked on a muddy bank nearby and a sparrowhawk, whom I suspected might be injured, fluttered to rest in a gateway.

I returned to the road and looked forward to a crossing of the famous Transporter Bridge. It was closed for painting work and my chance to complete my pair of crossing transporter bridges with that of Newport in South Wales was thwarted. The irony of having an extra four mile diversion up river to cross the Tees via the Newport Bridge wasn’t lost on me. 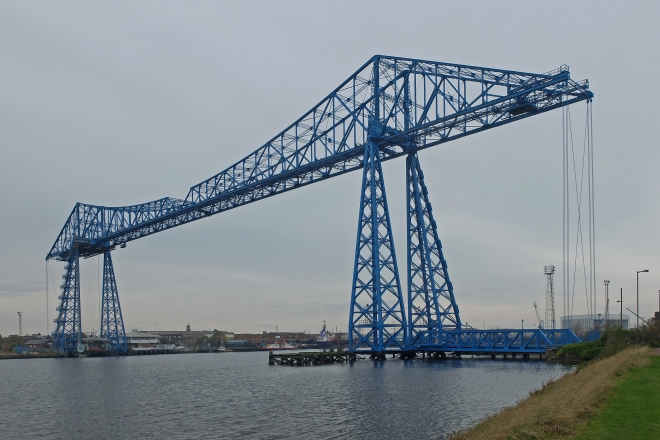 Having recovered my tracks I then took to the bizarre and extraordinary Teesdale Way. This OS marked trail took me straight through heavy industry, alongside huge pipe-tracks and even between rail tracks. The path was liberally covered with litter, industrial debris and edged with imposing but rotting high fences. It also became overgrown in places and even blocked by temporary security fencing. With nowhere else to go, I just scaled the obstacle course and followed the trail. The only wildlife I came across was the occasional rat, a few tethered traveller’s horses, a goat and surprisingly two roe deer who pranced away the moment they saw the lunatic who had decided to walk along this path. Why anybody would want to walk this part of the Teesdale Way was a bit of a mystery to me and indeed it seemed as if local industry didn’t want anyone to walk it either and though I felt uncomfortable and a little intimidated using it, I thoroughly enjoyed following it all the way to Redcar. 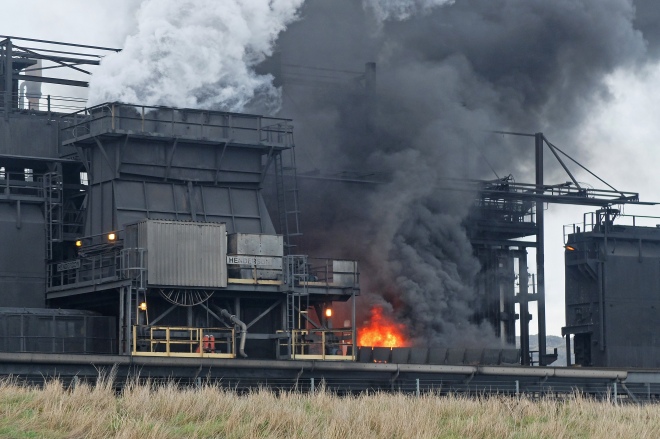 One thought on “The Tyne, The Wear, The Tees”