Today was one of my few truly restful rest days. Kate stayed on an extra day and took over most of the chores as I tapped out my blog, played with a few photos and caught up on emails. By the time we had stoked up with an enormous carvery lunch and food shopped for the next week it was time to pick up Aaron, the boyfriend of my second cousin Claire and a fella I only met once briefly way back in Exmouth. If I remember rightly, I was feeling pretty grim at the time but I clearly conned him enough to want to join up and support me for a week.

The evening was a top one as Terry and Alfie, who supported me back in Cumbria, joined us for the evening. Terry’s partner Annie made up the throng and the fourth chinese meal in seven days was probably a bit of an overkill on volume for the day and monosodium glutamate for an entire year. A quick pint in the smallest pub in Britain and another week was over.

It was another early start as I said a tough farewell to Kate and she made her way home to find out whether the dogs had wrecked the house in her absence. Her one week as sole driver had probably completely trashed her nerves in terms of driving a large vehicle which handles and responds like the proverbial whale. Despite the driving bit, I think she had enjoyed herself. Throughout this trip it has been just as important to me that everyone supporting me with looking after Snickers, finding stopovers and keeping camp enjoys it too. I’m not sure if I have a 100% record, but it would be lovely if I did.

A final waved farewell at distance saw me down the road, through a holiday park and around the chalets of Humberston Fitties. It was then onto the flood banks skirting Tetney Marshes Nature Reserve. This was an eight mile stretch of viewless tedium and I eventually dropped down onto the sands at Donna Nook with an optimistic hope that a few early arriving grey seals would be on the well-known breeding beach. I had been here a few times before and taken many photos of the cute newborn pups in the wind-blown sand but on this occasion I was probably a good two weeks early and the waiting ‘seal ranger’ was the only resident. So I stuck to the top of the beach and skirted the RAF bombing range.

The dune edged beach gradually became scrubland and this in turn gave way to salt marsh and samphire beds. I briefly turned inland and through the village of Saltfleet before returning to a now silty beach with the sea so far out that it felt as if I was in the middle of a featureless desert. I was half expecting a camel to walk across the horizon but the vague and distant shimmer was but a thin blue line of North Sea. The silty mud slowly became perfect holiday sand and the beach gradually narrowed to reveal a gentle surf, but Theddlethorpe was still devoid of people and, for me, that is why it has always been my favourite Lincolnshire beach.

In contrast Mablethorpe was heaving with nearly ten people playing on the sand. I think it would be fair to say that the holiday season was well and truly over.

If truth be known, I could have chosen to spend the entire day walking down the beach towards Skegness. With the beach from Theddlethorpe yesterday this would have given me well over twenty miles of continuous beach walking and a new personal best for the walk to date. However, I broke the continuity by stopping last night in Mablethorpe and after nipping into Sutton-on-Sea today for a shop stop I’m not sure whether it counts.

Sutton was a lovely little town apparently populated by large numbers of retired women all owning a mobility scooter. From what I could see they seemed to enjoy driving them around the promenade and seafront as if it were a kart track. With their personalised flowers and wicker basket touches, I couldn’t help but liken their behaviour to that of  teenagers and their “pimped-up” hot-hatches doing rubber burning donuts on a supermarket car park.

After one close brush with a scooter nearly resulted in an embarrassing injury which could have prematurely ended this walk of mine, I was glad to return to the beach. The dunes and the sea wall masked the land from my gaze and the view out to sea comprised one hundred and twenty-five wind turbines (I counted twice), twelve of which weren’t working. To be frank the rest of the day was dreary and I spent most of my time wandering the tide line on the look out for pretty shells.

My iPod kept me sane and a vast holiday camp brightened my entertainment as I approached Ingoldmells and Skegness. With the palisade fencing around it and the guard posts at the entrance gates it could easily have doubled for a prison camp. Only the smart tidy chalets and sparkly big-top gave the game away and even though I find such holiday camps completely alien to my remote cottage idyll, I admit to being curiously tempted.

With the prospect of the remnants of another hurricane passing through, I was not looking forward to a day on the exposed sea walls and banks of the fens. Fortunately the rain didn’t accompany this storm as it did when Bertha hit me back in Northwest Scotland.

I was expecting to get wet and I was expecting high wind, so I suggested to BBC Radio Lincolnshire that they might want to pre-record an interview and not try to do it live whilst shouting to each other with the white noise of a gale taking dominance. Hence Melvyn Prior gave me a good five minutes to plug my website and charity stuff whilst I munched my oatibix and sipped tea in the warmth of Snickers.

I set off through Skeggy town in full winter gear expecting to get drenched at some point. As I left town and made down the lane towards Gibraltar Point I knew that navigating my way across the fens would be less than easy. With numerous dykes, ditches, drains and rivers to cross or get around I suspected that my route planning was a bit hit and miss, with some tracks and paths looking decidedly private or inaccessible. I wasn’t wrong, the English disease of marking one’s territory with “Private” was well and truly back and my first option was not welcoming. Instead I found another decidedly dodgy route up the side of a double obstacle of river and parallel drain to find a marked footbridge heavily fenced and locked off. I crossed the drain via an Environment Agency compound advising me against trespassing and made my way up between the two water courses to attempt a crossing of the river further up. I was thwarted but a kindly Karen tending some horses showed me the best way up the main road.

Two heavy and blustery squalls hit me in quick succession as I listened in to the radio to see if my interview sounded reasonable. It didn’t sound bad and I thought I came across quite well considering how much my brain hates mornings. The A52 wasn’t a welcome sight and with the skies a heavy charcoal grey I donned my hi-viz waistcoat for the first time in months to trudge the grass verge for four miles until I could escape back down to the sea-banks near Friskney.
The afternoon comprised one long winding bank-top walk with the wind buffeting me from side to side like a late night drunk. I briefly and happily bumped into Tony, yet another coast walker, who was walking anticlockwise in sections having started in February last year in Minehead. We compared notes on involuntary and voluntary trespassing and I tried to help him with a decent route to Skegness. I’m not sure if he understood my ramblings across his wind-blown paper map, but we wished each other well and marched off in opposite directions.

To ease the last few miles of wind battering and featureless tedium I fed every horse I saw a fruit pastille. They seemed to like me and followed me till my packet was empty. I only ate one but Aaron wasn’t far away and I knew I still had a stock on board the van. Anyway, he also had a large stash of snacks and cakes to gorge on. 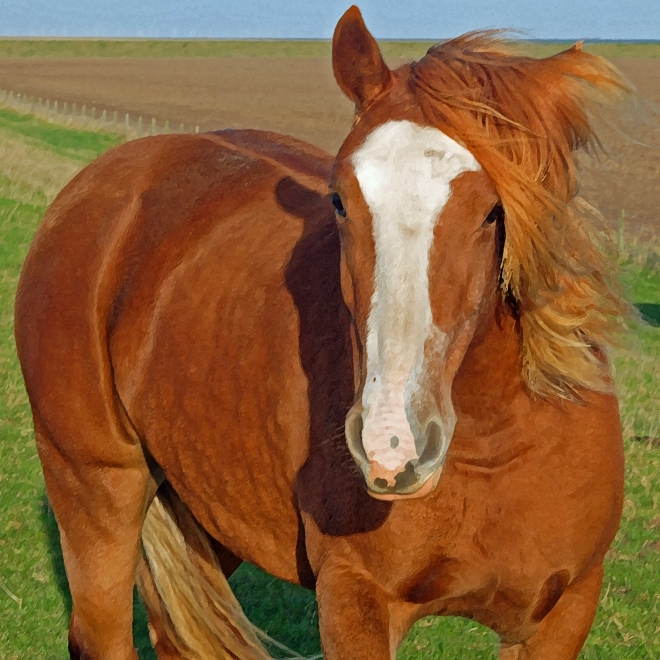 One thought on “Skeggy and the Fens”