An overnight thunderstorm and thrashing rain wasn’t conducive to a good nights sleep and I knew that today would be a long one. An hour-long drive back to Hollesley Bay from our continued stop at Southwold meant an early start, but by the time I set off walking it was already 08:30. It was also still raining, heavily.

My first big estuary walk of three in three days began with a trip up the River Deben to Woodbridge. With every step I became increasingly bedraggled as the rain seeped in. There are very few things one can wear that truly keep out persistent British rain and my boots failed first again. Fortunately my waterproofs have performed comparatively well, so my core remained dry even if my extremities were soggy, but nevertheless the walk up river was not a pleasant experience. The inclement weather also kept people inside and with the exception of a shooting party knocking pheasants out of the sky at will, I didn’t meet a soul.

As I reached Melton and Woodbridge the rain eased. The Dutch influence in the architecture at the Woodbridge Tide Mill tempted my camera briefly out of its damp case, but not much else did all day. The rain followed me, if lightly, down river but it was now on my back and certainly wasn’t making me any wetter.  That was a bonus.

On a better day the village of Waldringfield would probably have been very picturesque and from here I was soon back on top of a flood-bank threading its way through the maze of gullies and ditches of Spinny Marsh. Further into the marsh the path became less well-trodden and increasingly muddy. A mile in and the flood-bank melted into a muddy slurry, it had been washed away. I swore, turned back and in the increasing gloom of late afternoon found another inland route down to Old Felixstowe where Steve and mum met me out of the darkness sitting in the empty car park of an isolated pub. If ever there was one, it was a very strange place to meet my mother, especially with more than twenty-seven miles of mud on my boots and trousers.

A very brief meeting with James, an old cricket club pal, in the same car park saw me off around the town of Felixstowe to begin the trudge up estuary two, this time the River Orwell. Felixstowe has the biggest container port in Britain and the huge 24/7  logistical operation was very much in my face as I waited for a huge freight train carrying thirty or more containers to cross my path.

Once out of the docks, I was worried that the ground would still be saturated from the rain of yesterday. However, the weather was on my side as bright sunshine and a gentle breeze did its best to dry the surface under foot. I stayed river side with only brief inland forays to change the scene. As I closed in on my river crossing at the Orwell Bridge near Ipswich, I interrupted two women for a brief chat as they reminisced and strolled their way along the waterfront with a can of beer in hand. It was the only chat I would have all day and their company, even for five minutes, was a blessing in this surprisingly remote part of the Suffolk coast.

The river downstream of Chelmondiston village held an equally bleak but fascinating sight as dozens of old barges and boats, once trendy houseboat conversions, now stood in various states of decay. The odd one or two were still in use and well looked after, but the majority were now looking ready for reclamation by the river, their wooden stages and hulls tilting and rotting in the mud. 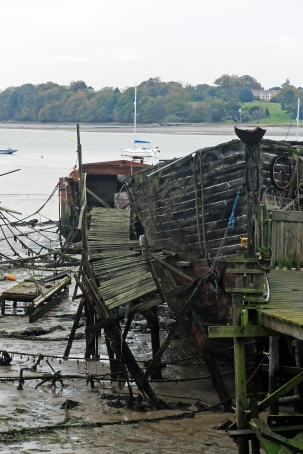 The light was fading fast again and time was running thin as I rejoined the flood-bank for another floodlit view of Felixstowe docks from the opposite side of the river. Even at distance, the noise was just as deafening as it was this morning. Every klaxon, every bell and every reversing alarm echoed across the water and the neon lights of the port were bright enough to throw a glowing light across my path as I turned into another peculiar outpost at Shotley, sandwiched neatly between Felixstowe and Harwich, my next destination.

My third estuary in three days was that of the River Stour and the rain was back, this time with a very sharp and blustery wind. Luckily the rain didn’t stay long and by 11:00 the sun had made an appearance. The sun and breeze of yesterday hadn’t been particularly effective at drying the ground or the grass and the rain of last night and this morning had now made things extremely slippery and muddy under foot. With the added wind factor buffeting me around, progress up river was slow and after a brief dip inland to the roads and tracks showing off the enormous houses of Stutton with their private tennis courts, I eventually made it to The White Bridge and my crossing into Essex. Suffolk had been a soft and gentle county, a pretty county, a county maybe worth further exploration. It had also been another flat one and Essex promised little different.

Manningtree and Mistley brought me simple roadside path walking, but as the light faded the paths vanished and I resorted to following the Essex Way inland and not risk a fast, winding and busy road verge. I was rewarded with a fire-ball sunset, which faded all too quickly as the weakening late autumn sun hastily dropped over the horizon. With darkness the route into Harwich seemed to go on for ever. I had underestimated my time out for the day and I arrived well after dark and much too late to effectively see the ground under my feet. From now on, earlier starts were needed for any day over twenty miles long. My last three had all been over twenty-five and walking in the dark, either roadside or along remote sea-walls or cliffs isn’t clever.

One thought on “Up River, Down River”