It was a brief mile or so up the River Blackwater to Maldon and then a sharp turn to head back down it again, giving me a whole day in the company of a wide and muddy tidal river. I spent the next couple of hours dodging showers as I managed to walk East across the front of the first big black cloud approaching from the Southwest, which dropped its contents on Maldon now some distance behind me. The next two smaller ones hit me, but not enough to dampen my spirit and barely enough to really need the waterproofs I had put on in readiness.

It was very much an iPod day and any thoughts of a river being soothing company were lost as the monotony of the flat landscape became a soporific reality. A brief rainbow across St Lawrence Bay and Maylandsea woke me and an adder was the most sociable of creatures I saw all day, though I wouldn’t say that the hiss it gave me was a friendly greeting. I was amused by the sight of a riverside pool with a dozen plastic duck decoys bobbing around like corks. As I approached these were supplemented by two flapping and equally plastic ducks mounted on poles at the water’s edge. Finally I came across some camouflage netting and the barrel of a gun as a duck shooter scowled a begrudged greeting my way. I think I’d just ruined his day. He even had one of those plastic whistles that sound like a mumbling Donald Duck. I thought I looked ridiculous. 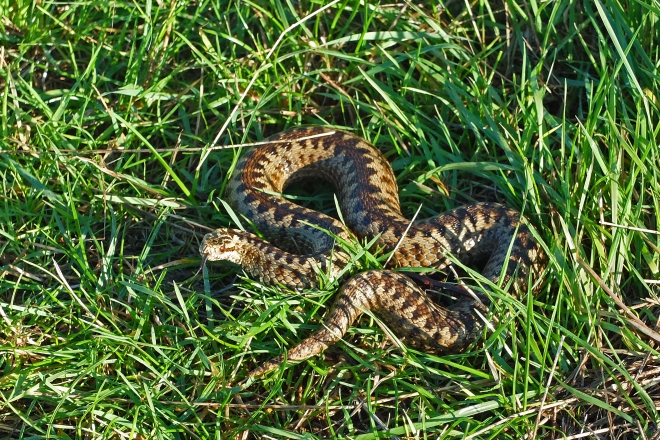 Maylandsea, Mayland and The Stone were places which offered little of interest other than the odd boatyard and a few nondescript houses for me to throw a passing glance towards.  However, the light of the now rapidly setting sun cast a shallow winter warmth across the water to the nuclear power station a few miles away at Bradwell. The marina near Bradwell Waterside looked as if it might have given me some smart or antique boats to look at but sadly the sun had long gone by the time I got there and all I wanted to do was have a shower and get something to eat. 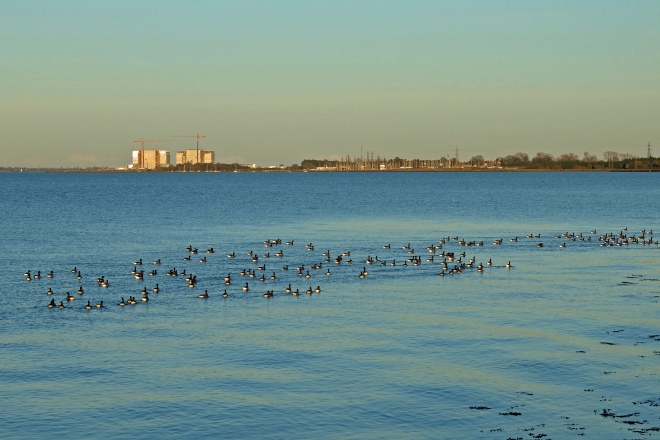 I was immediately back on the sea-bank again and started the day listening to the Anglo-Saxon shouts of the workers decommissioning the nuclear power station. Their words were soon silenced as distance grew and a cold wind blew in making me pull my woolly hat down low. The sea-bank and occasional stretches of concrete topped sea-wall continued in long straight sections interspersed with gentle curving ones and occasional sharp detours around a small inlet or sluice. 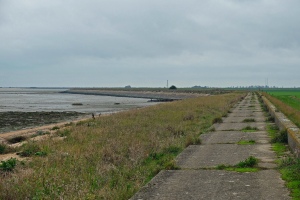 To break the tedium a lovely golden retriever bounded up to me from distance with two terriers trailing behind. After a barked greeting we were best of pals in seconds as Lennon stood on my foot and leant against my thigh slobbering as I compared ailments and doggy traits with his owner, Pam.

A few miles of real seaside didn’t last as I took a turn up the River Crouch. It brought little change to the terrain or the scenery and only a few huge thudding explosions from the range over the estuary at Foulness gave me any interest. I had a passing thought that I might have just seen a large chemical incident and briefly worried as a heavy rusty coloured smoke cloud skimmed across the bay in my direction. The cordite smell reassured me as the rest of the day sunk into obscurity.

By the time I arrived in Burnham-on-Crouch the cold wind had brought in some rain and I counted four sailing / yacht clubs along a clearly prosperous but short waterfront. The large marina half a mile further on was full of brash displays of wealth but with summer long gone I barely noticed any activity. The only noise was a strangely comforting one and I liken the sound of the wind drumming the rigging against the yacht masts to that of alpine cow-bells.

Heavy rain had been forecast from home and it arrived early morning to wake me and drip into Snickers bathroom a little too easily. Paul and I checked the skylight for leaks. What skylight? Was this another case of “It just fell off”?

With Snickers now an open-topped vehicle, Paul had a job on his hands looking for an urgent replacement and I headed out into the rain hoping his plastic bag patch wasn’t a long-term fix.

I continued up the River Crouch following yet more sea-bank and wall. The rain on my back wasn’t too much of a problem but the thick gooey mud underfoot was and every step seemed to make my feet slip away in random directions. Progression was slow.  By late morning the rain had eased, but I knew the mud would stay with me till Southampton now that the sun was weak and grass growth had slowed. It was the first time that I had really thought of the end. My family and friends had been mentioning it for a while, but I saw that as a minor irritation and had been in denial, trying to concentrate on one day or, at the outside, one week at a time. With over 90% of the walk complete I had entered the nervous nineties and the slow muddy progression would probably be mirrored in the clock ticking away in my head. I was preparing myself for a few mentally testing weeks. It really didn’t help that the whole walk up river via South Woodham Ferrers and back down again via the antique traders kingdom of Battlebridge was a featureless walk.

I ended the week with the sun going down over the pylons and yet more sea-wall to Hullbridge. Paul cheered my mood considerably with a newly fitted second-hand skylight. By the sound of his day it was entirely possible that his blood pressure had been tested a smidge. In my eyes he was a star for getting it fixed so quickly.

With the salubrious nature of our campsite, the slug populated showers and cold damp toilets by torchlight encouraged an early start. I dropped Paul off at Wickford station and I said my heart-felt thanks as he boarded a train for London with, I suspect, some relief to escape my slightly surreal, cold and muddy world. It had been a tough week for finding stopovers open to receive a motorhome and for driving the lanes of Essex with impatient drivers pushing their way through. The behaviour of drivers had changed hugely over the last few weeks and with every step closer to London the driving was undoubtedly getting faster, more aggressive and less courteous. It’s not a trait I like of the Southeast but it is a comment on how busy this part of Britain is and how overcrowding breeds an uncaring selfishness.

I picked up old uni pal Ian a couple of hours later and we headed over to stay with his brother Paul in Shoeburyness. An afternoon watching England lose to South Africa at Twickenham was a rare treat and looking at a large television screen was an alien experience with the colours and camera work almost hypnotising me into a restful doze on the sofa.