With light drizzle, a dense sea mist and no wind or chance of a warming sun to burn it away, I knew I wouldn’t see much today. In the morning that was probably fortuitous because what I could see of Lydd was fairly bland and complimented the weather rather well.

I made my way back to the sea at Camber Sands, not that I saw any sea. Then it was inland again to Rye. Now I knew that Rye wasn’t nearly as grim as Lydd, but the fog hadn’t lifted and I couldn’t see to form an opinion either way. So it was back down river and a brief meeting with Cousin Mike, Jane and their friends Rob and Mary. It was easily the highlight of my day as I spent half an hour walking and chatting with Jane and Mary as Mike and Rob cycled off to see some boats. I was beginning to wonder whether Cousin Mike might actually be stalking me. Not only had he supported me and driven snickers for six weeks but I’d also stayed at his house in Exmouth, stopped for a bacon butty at his holiday place in Wales and now bumped into him in Sussex.

I disappeared back into the mist and along the sea wall and shingle of Winchelsea Beach before a vague cliff like shadow loomed out of the mirk. Cliff End was a village of big houses with big gardens and I climbed the hillside via a steep muddy path fenced in between landscaped gardens drooping, dripping and well past their immaculately well-trimmed summer best. I stayed in the undergrowth over the cliff top and emerged from the bushes at Fairlight Cove to find Ann waiting in the lane to take me back to Birchington again, now some distance away. 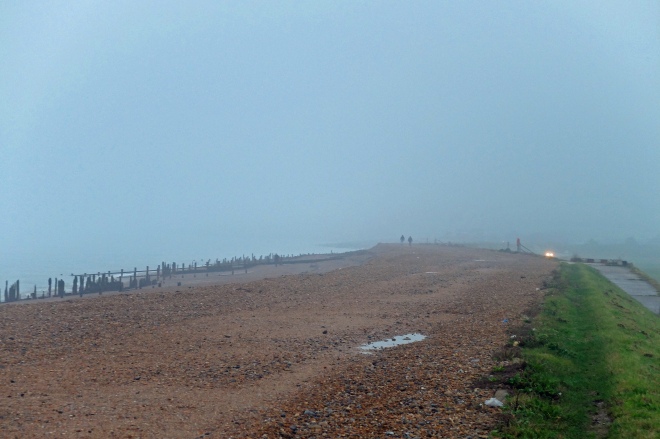 It was nearly a two-hour drive back to Fairlight Cove and heavy drizzle…. no, mizzle, stayed with me for the first couple of slippery hours up, over and down four steep hills. It was exceptionally muddy again, but I was also getting wet and it was highly likely that I would unceremoniously slip and slide backside first at some point. It really was all I could do to stay on my feet, but somehow I did even when I came across a landslip which had left a greasy, gloopy steep bank to somehow get around.

The rain melted away as I dropped down into Hastings and I was treated to another seaside town still trying to keep up its dignity. Like so many, it was a little past its best but it wasn’t tacky and it wasn’t cheap. I felt it just needed a few pounds of investment where time had taken its toll. From what I could see Bexhill was similar, the only exception was the rather spectacular art deco De La Warr Pavilion which swept across the seafront advertising Frank Skinner’s presence in town.

From Bexhill it was shingle and road to Pevensey and more road to Eastbourne with its massive Sovereign Harbour development of flats, houses and a huge marina trying to bring an old-fashioned seaside town very much into the 21st century. It had been a long day and the long drive back to base wasn’t something I looked forward to. I knew my legs would seize completely by the time we got there and though I had tried to cheer myself with a Mint Magnum in Hastings, my thoughts had been dark ones for most of the day and though I had a few things niggling at me, I couldn’t really find a specific reason why.

Today was to be my last serious day of climbs and the heaviest one since North Yorkshire. We left Birchington at 7am, but I didn’t start walking till after 9:30 and I was keen to get cracking on a bright, exceptionally warm day.

The walking started with the promenade of Eastbourne sporting its own very elegant Victorian pier. The pier, like almost every other pier I had seen, had been damaged by fire. Fortunately, the very recent fire hadn’t destroyed the entire structure and repairs looked well under way. This pier, unlike many others I’d seen, wasn’t going to be left to rot.

I then made my climb up well trodden but firm grass paths to Beachy Head, the maudlin suicide capital of Britain where there are apparently an estimated twenty suicides per year. I didn’t linger to absorb any of the sadness but picked some pertinent music by The Who to listen to on my iPod instead. It was then quickly down and up, down and up, seven times as the rolling chalk cliff switchbacks of The Seven Sisters took their turn. I thought I climbed twelve hills out from Eastbourne, so by the time I’d climbed the last sister I was a bit lost as to what and how many I had just done. It was only when I looked back from the other side of Cuckmere Haven that the seven showed themselves properly.

The small climbs had all felt relatively easy and I had marched up the last few almost insisting that they challenge me by making me at least puff a bit. I supposed that fitness shouldn’t be an issue after 4,900 miles of walking, but it was pleasing to have it confirmed.

With one more climb out of Cuckmere Haven I was soon dropping into Seaford for more shingle banked beach, this time filled with heavy machinery mooching about and lazily carrying huge truck loads of stones from West to East and spreading them out again as a sea defence. I was sure the sea wouldn’t take long to move them all back West again and the apparent futility of such work puzzled me. I’d had a great day and reckoned that today would be in my top ten walking days when the approaching final ball of the innings finalised the score.  The weather had undoubtedly helped and as Mike B and his colleague Eric drove the three hours back to base for the last time, I tried to drop the good weather factor from my determinations.

Back to base for the last time? Did I mention that I had completed my last driver changeover? Well things change and unfortunately the logistics for my last week had changed rather drastically as Mike B had a business commitment which had cropped up and I had urgently and thankfully found a couple of substitutes to split the last week in two and support me in to Southampton. Hence, I drove Snickers down to Worthing to park her up for two nights as I ventured for a couple of days without any support and the use of a taxi to get me to my start point back in Newhaven. Not ideal, but if it worked I’d take anything at this juncture and a roasting hot hotel room, courtesy of Mike B, had all of its windows opened wide to make it feel more like a night in Snickers.

3 thoughts on “Mirk, Moods and Mods”