With the tide in and covering the causeway over to Lindisfarne, traffic was sensibly absent as Woody dropped me off for a fourteen mile inland detour following the official Northumberland Coast Path, also confusingly partly known as St Cuthbert’s Way and St Oswald’s Way. I made my way up and over Fenham Hill crossing the main East coast railway line having sought permission via a phone call with the signal box. It was also over the A1, through the village of Fenham and deep into the woods before emerging near Belford. Autumn was here and I enjoyed childishly kicking through the leaves in the watery shafts of sunlight.

The detour was worth it as I bumped into five separate hiking groups all up for a quick chat. In the mix I met up with Americans, a German pair and a couple of Diamond members of the Long Distance Walkers Association who were very enthusiastic about my little jaunt. I rather hoped that the conversations would reap some reward for the charities, but my record to date has been hit and miss with promises of a donation rarely turning into reality. I’ve always tried not to be too pushy as I’m never overly fond of people “tin rattling” at supermarket doorways and playing the guilt card if you pass them by without dropping some loose change their way. So for me to do likewise, even via a conversation about my walk, would be hypocritical and though I’m desperate to raise a vast sum, I don’t like begging for it. I have found every donation however large or small to be a very real and significant personal motivation, so maybe I should swallow a confidence pill and be a little more blunt.

Once I had crossed back over the A1 and the railway the views of Bamburgh with its vast and dominant castle opened out and it wasn’t long before I was on the eternally windswept beach, heading around Bamburgh to continue with sand under foot for the few miles to Seahouses. After a sandy walk of such quality I was overdue an ice cream and Woody met up with me at the little harbour filled with Farne Island tourism boats for a cone. I topped mine with a black cherry sauce twist. It was grand and with more dune tops and sandy beach walking we quickly covered the last few miles together to the outskirts of Beadnell and our seafront stopover.

I was assured that it wasn’t the ice cream but Woody hadn’t felt too well overnight. But with a fully fit friend it was nice to step out together for a few miles of dune and beach walking to Low Newton. It was all very pleasant but there was a real autumnal chill in the air and wooly hats were a necessity and not a misplaced fashion statement.

Once I was alone, Dunstanburgh Castle loomed and I soon lost count of how many times I said “good morning” to the hoards of couples out walking on a bright chilly day. The look in their eyes and the amble of their step told me that none of them were of the chat stopping type and if they had been I would have been lucky to make my destination before midnight. My “good morning” became a little repetitive and it soon evolved into a briefer “morning” and then a “hi” and eventually a nod and a smile. 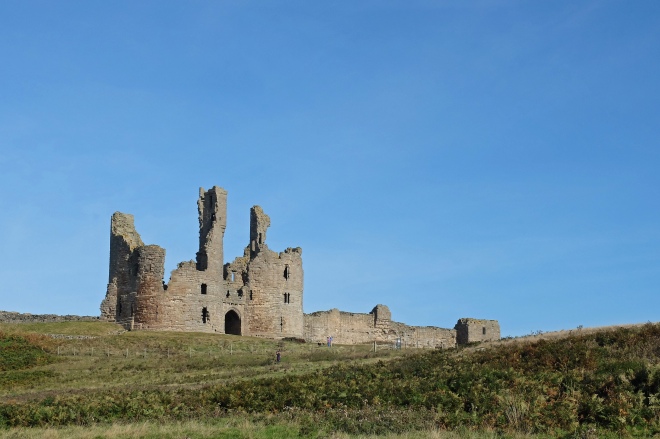 The smell of the smokehouse at Craster was a treat.  Smells have been truly evocative throughout this journey and have varied from the gorgeous to the revolting, from wood smoke and fresh bread through to sewage and rotting fish. I could name dozens and each would remind me of a place somewhere on the British coast.

I was soon at the less smelly Boulmer for more beach walking and after a couple of nips inland to round small estuaries Alnmouth and Warkworth were soon over my shoulder too. Sand and castles had been very much the theme this week and with a stiffening breeze on my face the woolly hat was donned again to finish the day in the dunes south of Amble at Low Hauxley.

Woody joined me again for the first four miles along the sand. He had undoubtedly done more walking with me than anyone else so far on this trip and his company was very welcome. With his long legs and purposeful stride he made a good pace man and helped me ease through the early morning soreness in my right hip. He stayed with me till Druridge Bay and we made good time despite a strengthening headwind. As soon as he left my pace fell back a bit. I blamed the softer sand, but in truth I was probably looking for an excuse as I remained on the sand for a further three miles to Cresswell.

From here on the industrial Northeast began to make its presence felt. Lynemouth was first on the agenda with a colliery history and an unsightly coal-fired power station further blighting the landscape. With the large ex mining town of Ashington nearby coal mining history is huge in this area and the beaches are only now recovering from the phenomenal injuries inflicted upon them by the dirty but once critical industry.

A few dips inland to navigate estuaries only hastened me back to the coast as first Newbiggin-by-the-Sea and then Cambois brightened my day and my mood. Newbiggin sported a modern Sean Henry sculpture on the new breakwater as part of a much larger project to restore the town’s coastline. Cambois beach had also benefitted from a huge clean up and was surprisingly welcoming if only for a quick half a mile. But after that Blyth was decidedly downbeat and reflected its loss of employment with the loss of traditional coal and shipbuilding industries. I unconsciously hastened my step through the town but that was more to do with my unusual and slightly conspicuous appearance and not any intimidation. Dressed in my walking gear with a rucksack and walking pole in hand just doesn’t feel right in some towns and cities.

A day off at a popular and noisy campsite was a welcome but barely relaxing break after a good week for both weather and miles covered. Sue had arrived early last night for her second week as support and to catch up with Woody. They had spent the evening ganging up on me to take the mickey out of my nerdy statistics and organisational detail. It was entirely justified and completely deserved. Woody departed Snickers at Ashington bus station with genuinely warm thanks and having taught me how to identify a couple of additional sea birds. Thus Sue and I were left to return for a relatively quiet day with Sue escaping for a long run instead of having to endure an afternoon of my admin.