With a couple of shortish days ahead there was no hurry to start early and with plenty of overnight rain continuing as showers my logic told me that every drop of rain that fell before I started was one less falling on me as I walked. It also helped that the drive back to Kinloch Hourn from our campsite at Shiel Bridge was a long one down the supposedly longest dead-end road in Britain.

The coast along Loch Hourn was inaccessible so a sharp climb inland took me up through forestry and across very wet and boggy moorland. There were plenty of full streams to find a dry route across and every waterfall was equally full. I wasn’t high for long and I soon began to drop down following the upper reaches of the River Arnisdale.  With every yard walked, bubbling streams, trickling gullies and dripping bogs quickly turned the river into a deepening torrent and I could see the track I was following wanted to cross to the other side. The point at which it decided to do so did not appeal to me, so I followed the bank downstream looking for an alternative. The ground was saturated and my feet were too, but I thought better of leaping waterfalls and continued downstream until the river shallowed as it approached a loch. Any thought of dry feet had long gone and I had little option but to wade knee-deep across the river to rediscover my long-lost track.

The track now rather arrogantly followed the river with ease and dropped steeply down Glen Arnisdale passing waterfall after waterfall until everything quietened and flattened as I reached the valley floor near Corran. The view back over Loch Hourn towards a very dark and moody Knoydart told me that I was no more than a few miles from Airor and my walk of two days ago. This had been a common theme throughout this walk and I was only now getting used to it.  Though it had often been frustrating in measuring progress, it wasn’t really bothering me anymore. 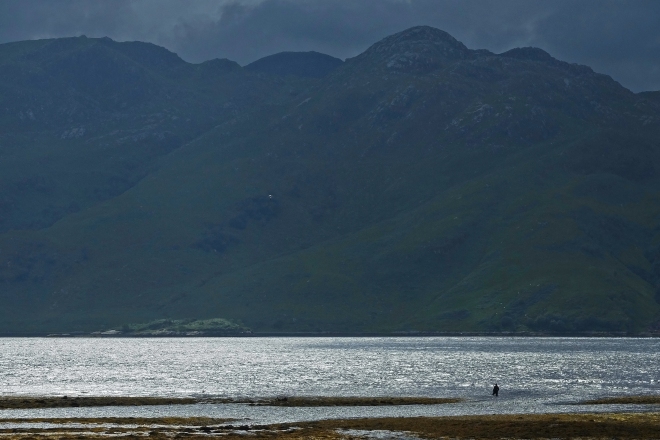 It was damp and miserable again and I was beginning to worry for Ray and Suzie’s happiness in having a week-long holiday with me, a cramped motorhome, eternally damp days and frequent midge clouds. However, their spirits were undoubtedly up and they seemed to be enjoying themselves eagle spotting and stopping off at every spectacular vantage point.

For me today wasn’t much of an adventure at all as I spent pretty much all day walking along the lane with only occasional forest track to keep my interest. I had a grand final view back towards Knoydart and Airor Bay as I turned the corner to edge North along the Sound of Sleat with the Isle of Skye beyond. Once the trees and headland opened out Glenelg Bay and its small pebbly beached foreshore tempted me down for a few minutes of beach combing.

I met up with Ray and Suzie in the village of Glenelg and offered to buy them an ice cream. Alas, the local shop freezer was devoid of anything other than a couple of unappetising milk lollies and a smartie pop-up and even I didn’t fancy that. Instead Ray and Suzie indulged me with some tourist stops at the brochs nearby. I couldn’t work out whether the information boards displayed at the brochs describing the life of the Iron Age Picts inside these conical double walled towers / houses was fact or merely a rough guess. I suspected the latter.

After two fairly easy days I was beginning to worry that I might need toughening up. A lane walking start didn’t offer much in the way of a challenge but it was only a couple of miles before I left the road at the small turntable ferry to Skye. The Lochalsh Way along Kyle Rhea to Ardintoul gave me the change I wanted as a nice marked coast path wound its way along the water’s edge.

From Ardintoul Bay everything changed. Ordnance Survey had a nice clear path marked on the map, on the ground it was very different tale as I attempted to get up into Ardintoul Wood. First it was thick head-high bracken underlain by invisible rotten wood and tree stumps. Next it was bog and heather, underlain by invisible rotten wood and tree stumps. Then it was just rotten wood and tree stumps but up a very, very steep hill and into thick, and I mean thick, nigh on impenetrable coniferous forest. My GPS told me that I had crossed and recrossed the path more than half a dozen times, but I hadn’t seen it so I climbed higher to try to find it one more time, only to discover hidden cliffs tucked away among the trees.

And this wasn’t the path either!

Eventually I found a path of sorts. In places it looked as if it had been used as a mud-wrestling ring and that they were trying out consistency and depth in each pit as some form of bizarre experiment. None was labelled, so one pit might be barely tread-deep but the next would be knee-deep, but the only way you would ever know was through trial and error. I emerged a little grubbier than when I went in and the forest occupants had undoubtedly heard some good old-fashioned Anglo-Saxon shouting but at least the path eventually got a little better and a path marker even made an apologetic appearance.

I dropped back down and passed by another broch to reach the lane at Totaig and a cracking view across Loch Duich to Dornie. It was then an easy six miles East along the loch-side road to meet up with Ray, Suzie and, da daaa, my Kate who had made her way up from sunny Leicestershire since stupid o’clock this morning to spend a week embedded in my little world. I just had to buy them all a Mint Magnum to celebrate.

A huge and well deserved restaurant meal with Ray, Suzie and Kate at Shiel Bridge kept me “busy” for much of the night, so Kate had a grand welcome to life aboard Snickers. Ray and Suzie departed South with profuse thanks even though they had only had to endure my close presence for a few nights after I had vanished into the Knoydart wilderness. So it was down to another day of photo selection, blogging, editing and shopping – though Kate did this bit – whilst we waited for Alec to arrive at Kyle of Lochalsh station for his second stint, the first being what seemed like years ago back around Land’s End.

2 thoughts on “Inch by inch North”