Heavy overnight rain had left the air still and the hills draped with shrouds of wispy cloud. Loch Duich had a mirror like calm and I was half expecting a sea eagle to swoop down and take a salmon right in front of me, but maybe that was a little over optimistic with my enthusiasm for the quality of the light and the photogenic qualities of the loch.

It was pretty much all road walking today and the A87 didn’t hold too much excitement for me. But it wasn’t a white knuckle ride like many of the previous A roads. This one seemed to be edged with footpath for much of it’s length and when not, wide firm verges made the going fairly relaxed.

As I approached Dornie everything pointed towards the tourist heavy castle of Eilean Donan. The castle so named as king of the otters sounded a peaceful place to visit, but with a car park nigh on full and coaches welcome I skipped on by to let Alec and Kate give me the low down on its history. Apparently it had a complex history, but when I asked them for details to add a bit of intellect to my blog it became clear that they had only absorbed a few spasmodic facts but rather liked the one that apparently 2 McRae’s and a postman had managed to hold the castle against 500 Macdonalds. Beyond that they both suggested that I try google for more information. My only additional cultural fact absorbed was that apparently scenes from Highlander were filmed there.

So onward for my only other bit of culture for the day and the pretty loch-side village of Plockton……where Hamish Macbeth was filmed…..ho hum.

Another night of heavy rain pounding the roof of the van two inches above my nose wasn’t great for sleep, but at least it was dry even if the clouds still looked very heavy as I left Plockton. The dry weather lasted for about 20 minutes and then the rain set in like only Scottish rain can. Sometimes it was light drizzle, sometimes even a mizzle but mostly it was lightweight drops falling in a very high concentration. Something I now call a “pizzle”.

It was a shame that the rain refused to relent as it spoilt any view across Loch Carron, any view back to Plockton and any view at all apart from the surprisingly high number of cars using the almost, but not quite, two laned A890 which followed the railway alongside the South shore of Loch Carron. The only joy I got out of the walk was my appreciation of just how many foreign tourists there were on the road. In my own straw poll league table the Germans were definitely first, followed by the Dutch and the Italians almost equal second with the French, Spanish and occasional Swiss and Danish making up the numbers. Americans weren’t obvious but were probably still trying to master a “stick shift’ on a right hand drive hire car and hanging around the castles talking loudly about their Scottish heritage to anyone who might be able to overhear. Only one hire car tried to kill me, but I never did identify the nationality of the driver. I hope they understood Anglo-Saxon.

When I eventually turned the corner and headed a short way up the North side of the Loch to the camp site the rain miraculously stopped and in the few minutes of warm sunshine I dried up sufficiently to meet up with Kate and Alec looking like I had never seen a drop of rain and feeling a complete fraud. 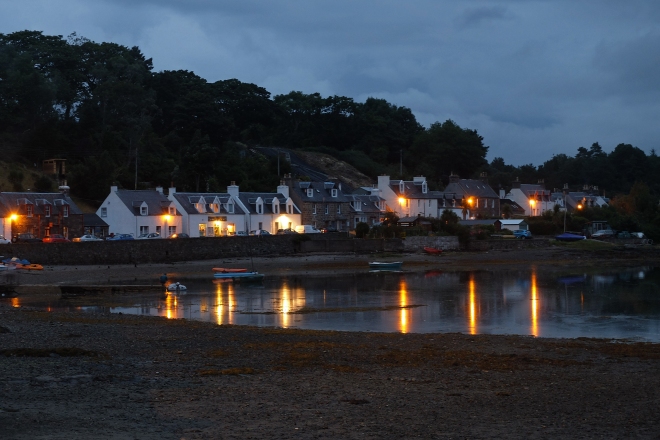 With dry weather tenuously forecast, I made my way back down the lane edging Loch Carron towards North Strome and Ardaneaskan. It was pleasing to be able to see the other shore and the views gradually opened out and back towards Plockton and Skye beyond.

I rounded the headland to cut back North, inland and off-road along a well-trodden path over a low pass and down into Achintraid. The slightly foreboding but also welcoming Pass of the Cattle followed a thin zig zagging line up into the mountains on the other side of Loch Kishorn and when I finally turned the top of the loch I too followed that line and started the climb.

The road was heavily populated with tourists, some of whom clearly had no idea how to properly use passing places or reverse a car and as the pass wasn’t inordinately steep I was a little surprised to see some fairly abject vehicle manoeuvring going on further up the road. However, the views from the top were grand both back to the East, where the road itself made an impressive sight winding its way down into the valley below and to the West where the coast opened out to reveal Skye and the Wester Ross shoreline far below. 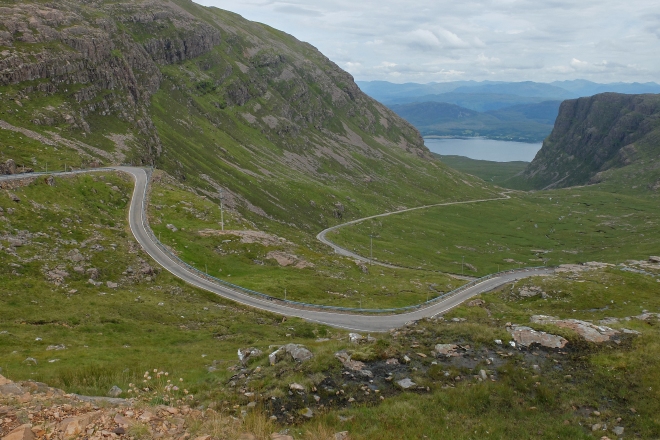 The pass climbed up over 2,000 ft and I managed to get to the summit in just under two hours and descended into Applecross another hour and three-quarters later. I had even surprised myself at how easily I kept my pace up the hill and happily sang along to my iPod without losing breath. My fitness had clearly improved since February and undoubtedly so from when I last sat behind my desk at work last year.

I arrived to find Snickers ensconced on a busy campsite and Kate and Alec whispering at my early arrival. Alec disappeared and re-emerged with three Magnums in hand. My choice was the mint one again and I had enough time to enjoy it in the warmth of the late afternoon sunshine just before the midges said hello for the evening.