With a change of county came a change of scene, but with that scene there was a price to pay – no decent coastal route. I had tried hard to plan something close to the coast but a lack of permissive paths made this one of the most, if not the most, difficult days to find a navigable route that didn’t involve walking along the edge of a busy major road or deliberate trespassing. After about five failed map staring attempts I settled for some side roads and one potential trespass, it would have to do.

I started out with a pleasant little jaunt through the thriving wealthy villages of South and North Wootton with some teenagers warming up for their Sunday morning football and dog walkers out in droves. Paths and side streets took me slowly inland to the edge of the Sandringham Estate and a quick well-worn woodland walk before I returned to the lanes coastwards again to Wolferton and its immaculately tended but long closed former royal railway station. From here the route through to Snettisham was, as expected, marked with the usual English disease of ‘Private‘ signs at the open gateway to a clear and well maintained concrete farm track. With the prospect of a good eight mile back tracking diversion, I had little option other than to ignore the sign. My involuntary trespass through farmland belonging to the Sandringham Estate, sorry ma’am, was a brief one and a mile later I was on RSPB land at Snettisham and in the reassuring company of Sunday lunchtime twitchers. They were a welcome sight with their long lenses and I was just mightily relieved to see them and not a Duke with his long barrel.

Things became much easier from here on and I was able to stick to the sandy shingle sea front at Heacham and on towards the archetypal seaside town of Hunstanton. A few low eroding cliffs with dozens of fossil collectors scrambling about in the freshly fallen stone tempted me to have a delve too, but with so many other pairs of eyes hunting I thought the area had probably been well sifted. Besides, a large and very visible crack in the cliff face dissuaded me and I couldn’t help but cast a worrying wince at both the adults and children poking and prodding their way through the rock immediately beneath the cliff.

I now had the luxury of a well-marked coast path again as the Norfolk Coast Path made its entrance. It was half-term week for many and the sunshine brought families out in their masses. Campsites were busy and I had a sneaky but unfounded fear that Sharpie might struggle to get us a pitch for a few nights.

In seeing so many people, a friendly “good morning” was commonplace but chats were almost non-existent. One brief chat with a former sports injury doctor brought a small donation for the charities and cheered me immensely, but with families and strolling couples now much more commonplace than serious walkers and hikers, such conversations and thus donations were becoming increasingly rare.

Overall the day was one of huge scenic variation. None of it I would call spectacular but none of it was dull either and I enjoyed the changes under foot as I switched from dunes to reed-bed board walks, sea-banks to roads and gravel paths to sandy beaches. Though it was still very flat, Norfolk seemed far more adventurous and family friendly than the Lincolnshire Fens and boredom was not an issue.

I was keenly and almost religiously now following the Norfolk Coast Path and a seemingly unnecessary duck inland at Thornham took me temptingly passed the pub and restaurant of a celebrity chef tucked in among the equally upmarket and aesthetically pleasing flint and brick cottages. 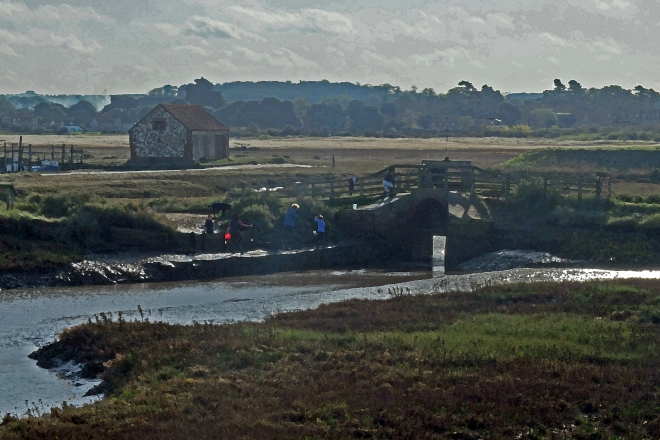 A return to the coast took me along a narrow board-walk edging the reeds and Brancaster where I met up with Sharpie who had run back seven miles to meet up. We idly chatted and almost ambled our way along in the warm late afternoon sunshine and came across the wide and beautiful open fine sand of Holkham Bay. With the clocks having gone back at the weekend the evenings were drawing in and the light faded as we walked into our farmyard campsite and a clear night sky full of stars.

Another grand autumn day brought out more hoards of half-term strolling families and the woodland walk around the headland was a brief respite from the crowds before I made my way down the sea-bank South towards Wells next the Sea. The harbour walls were lined with supervised children dipping lines into the water and filling buckets with crabs. The sheer numbers of people around had made opportunities for privately draining off two cups of breakfast tea an impossibility and the appearance of a public loo was a huge relief to the increasing possibility of an embarrassing and very public accident.

Out of Wells I made for Stiffkey and a mystery circle on my map which had been pointed out to me by a friend on Twitter. The circle was a strip of tarmac about a hundred metres in circumference and the mystery was solved at lunchtime when another Tweet from a follower provided a good and plausible explanation. Apparently the tarmac was a launching strip built by the US Air Force in the 1950s for remotely controlled experimental aircraft (prototype drones) to be launched at full throttle from a tether connecting it to a central post and swivel. I couldn’t help but think how ingenious things were before the digital age and how practical engineering solutions were once at the forefront of exciting development and not perceived as a disruptive and unnecessarily expensive cost as they seem to be in this modern management driven world. The ‘Whirlygig’ was a relic of our recent inquisition and a sign that ingenuity was once highly regarded.

Blakeney was even more popular than Wells and a sea-bank walk around the point involved crossing paths with a continual stream of ambling families. As I dipped inland away from the point the very pretty and probably very expensive Cley next the Sea followed before it was back out to the coast and a long shingle beach grind down towards Sheringham.

After five miles of trying to find a firm surface underfoot I got fed up of the shingle. I saw that the huge piles of cobbles and pebbles reached right up the cliff face, so I went up and made my way for the relative comfort of a cliff-top path. As I reached the top I caught two men out of the corner of my eye approaching at marching speed from my right. I didn’t fancy the ignominy of being overtaken so I stopped for a few seconds to fake a map check and let them through. I looked up briefly as they strode on through without giving me a glance.

A pair of sheepish grinning faces turned to give a slightly breathless greeting as JH and Sharpie had spent the last mile or so chasing me down the beach having over-stayed whilst imbibing a few ales in the local hostelry and waiting for my arrival. A great surprise to have another friend join us for the evening was added to by the extra treats of a room at a very comfy B&B plus a few more jars and a meal in another hostelry nearby. This surprise was a very welcome one indeed.

One thought on “Eastbound to East Anglia”