Until today nobody had quite completed a full day of walking with me. JH was to break that record and it made for a very welcome unplanned change to have his easy conversation and company for every step.

Indeed, all was very pleasant today. The weather was more suited to mid August than end October with warming sunny spells and only a brief very light shower to barely dampen our boots. The walking was undulating if not steep, with easy low cliffs and a brand new way-marked section of Norfolk Coast Path to follow.

Cromer came and went quickly with its short but rather grand pier reaching out beyond the groynes and shallow surf. It was then on to Overstrand and Sidestrand with paragliders cruising the rising air along the cliff edge with ease and precision only dropping for soft, pin-point landings when they really needed a break.

The cliffs were eroding badly in places and the sea defences were becoming quite poor, seemingly getting worse with every step East. It looked as if the authorities had just given up on this section of coastline and having seen the expense and effort made in other areas it felt more than a little unfair.

We met up with Sharpie at Mundesley and settled for a couple of minutes of group ice cream eating. Mine was a Magnum of course. Together the three of us then dropped onto the sand for a beach walk around the large gas terminal at Bacton (who had notably made an effort to install their own sea defences) and down towards Walcott and Happisburgh which, for no accountable reason, is pronounced “Hazeborough”. It’s not just the Scots and the Welsh with complicated place names.

It was back down to an eroding coast now devoid of sea defences. Roads disappeared into thin air and pipes hung like useless rags along the cliff edge. Happisburg seemed to have been forgotten and it’s fate left to the mercy of the elements. Like East Yorkshire coastal erosion is a big issue and understandably so.

I was back on my own and a short length of path gave way to sand. With a reappearance of defensive groynes and a sea-wall it was a high tide obstacle course around Eccles on Sea. The offshore granite reefs now offered a new and different kind of sea defence and with them came a brief inland diversion at Sea Palling, if only to have a look at what I was missing on the other side of the wall. I wasn’t missing a great deal.  The wealth and quaint gentility of North Norfolk had long since gone and was now replaced by a bleak, bland, end-of-the-road sort of place. So it was probably wise to head back to the beach and walk the seaward steps of the sea-wall. I was rewarded richly with a large grey seal colony huddled in groups for two miles along the edge of the surf. One group had chosen a spot too close to a car park and human laziness and ignorance was brashly on display. People were getting too close and one stupid woman hiding beyond panda-eyed sunglasses and in a world of her own almost tripped over a tiny pup. The pup was chased off and she laughed as I growled at her ignorance in not knowing how much energy the pup needs to conserve in its early days as it builds weight. I also wondered if that pup would survive and whether it’s mother would desert it. And as one woman bent to touch another pup I equally feared for the pup’s desertion due to the scent of some foolish human on its offspring. I also quietly hoped that one of the big adults might actually offer up their very sharp teeth. It was a saddening scene and one that made me move on quickly.

At a distance further down the beach and far enough to discourage most humans I came across another group of seals happily undisturbed. I kept my distance but a newborn pup mistook my black attire for his mum and started following me along the beach. I backed off and sat on the rocks a good distance away watching them as I ate my lunch. The pup dozed off and the adults settled back to their general bickering and gentle wailing. The last few miles of beach were clearly as popular with breeding and birthing seals as Donna Nook back in Lincolnshire and I questioned why this one wasn’t closed off to the public or patrolled by a warden. That’s a job I could fancy if anyone wants to make an offer. 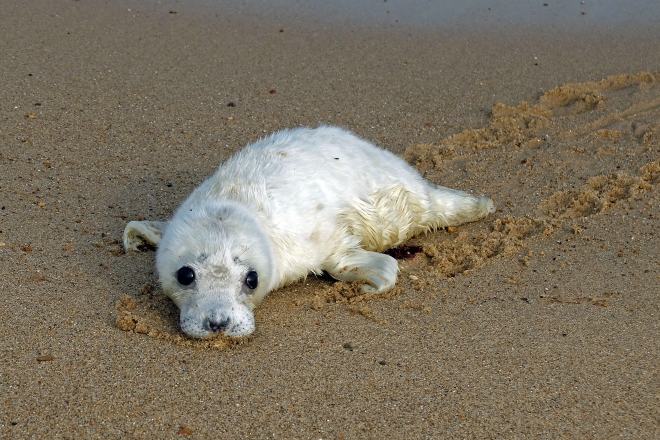 The rest of the day comprised more beach, more dunes and more run-down seaside towns and villages as I turned in for the day at the lesser known and much less glamorous California. But the pub did do a cracking carvery.

An easy beach walk passing Caister-on-Sea started the day but I soon ducked inland at Caister Point for the roads into Great Yarmouth. As the town closed in, the promenade began and much though I thought that the holiday season was over,  it was apparently back with throngs rather than hoards out enjoying a warmth more typical of August. Donkey rides were still popular on the beach alongside Britannia Pier. The big theatre sat heavily on the old structure with large posters advertising many big name acts due to show up sometime over the next year. Great Yarmouth was brash but clearly thriving. The seafront felt almost as long as Blackpool’s with the southern Wellington Pier home to a huge bowling alley and the pleasure beach still entertaining a few hardy souls on the log flume.

I attempted to get all the way down to South Denes via the seafront, but as I approached a razor wire topped fence closed in on the sand and the port authorities barred access. I back-tracked and cut across to the quay-side on the West side of the promontory for a walk North to the town centre and a brief foray through the bustling market square. My hesitation in the shopping centre was a brief one to top up on cheap CDs to add to my growing iPod library and I was soon over Haven Bridge and heading South along the West Quay outpacing a slow-moving traffic jam making its way out of Great Yarmouth.

At Gorleston the beach even had swimming trunk clad children playing on the immaculate soft sand. It was warm, but I didn’t think it was that warm. The promenade was less chips and candy floss and more about coffee and cakes. It slowly gave way to a path and the path became beach. The beach then became a closed beach thanks to sea-defence works but without any warning I had to scramble up the cliff, cross a golf course and make my way through a huge holiday park in Hopton to find Sharpie and his company for the last mile of another county in another week as I made my entrance into Suffolk.